whats up yall!? this is the first full build ive had yet this year. and it feels good to be out of remote start season. so, to the point, the customer came in and wanted a good sound, and full function of his ipod, with a bluetooth system, integrated sirius, full function navigation. so pretty much he wanted to get rid of all of the separate pieces that were cluttering his dash, floor and center console. so this is what was came up with;

up front for the head unit, i decided to put in the brand spankin new alpine iva-w505 and that unit with the blackbird in the bay solved all of the integration tasks. and it really is an awesome unit. for anyone thats thinking of getting one 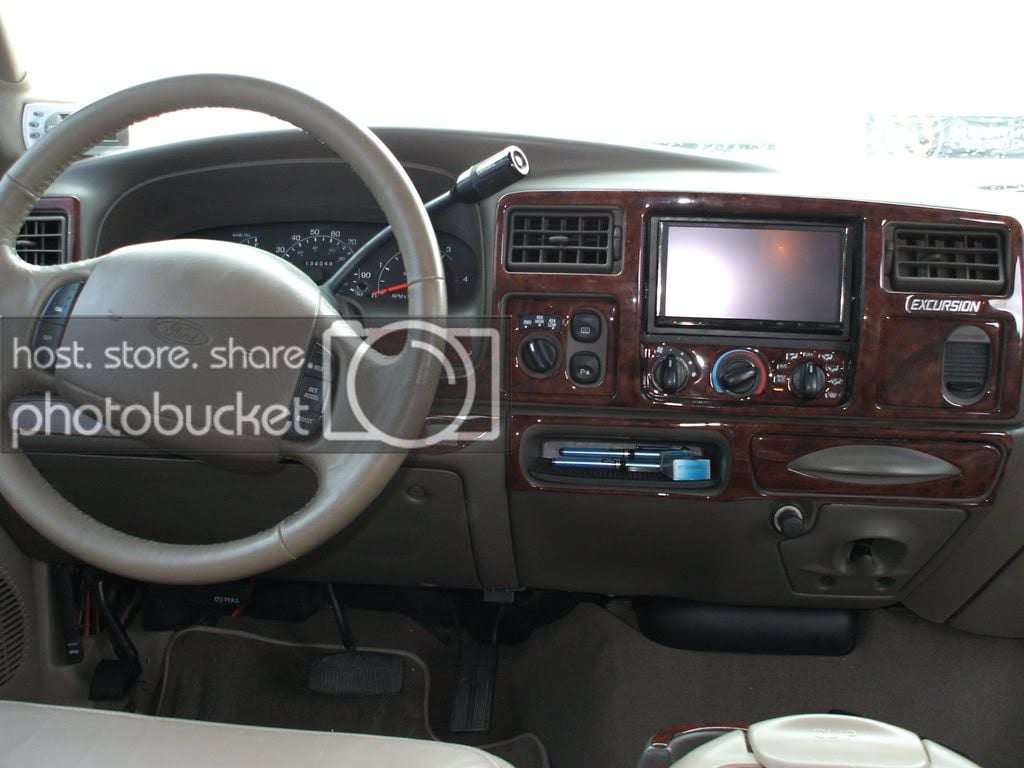 next up, as for midbass and high's i decided to keep it simple and we did a set of MSync 6's in every door and also in behind the second row seats. the msync's are nice because of the midbass that you can get out of them, the high frequency is a little over the top, when you throw a big amp on it so ive had to cut the top end out of them to make it not light your tympanic membrane on fire when listening for a long time. 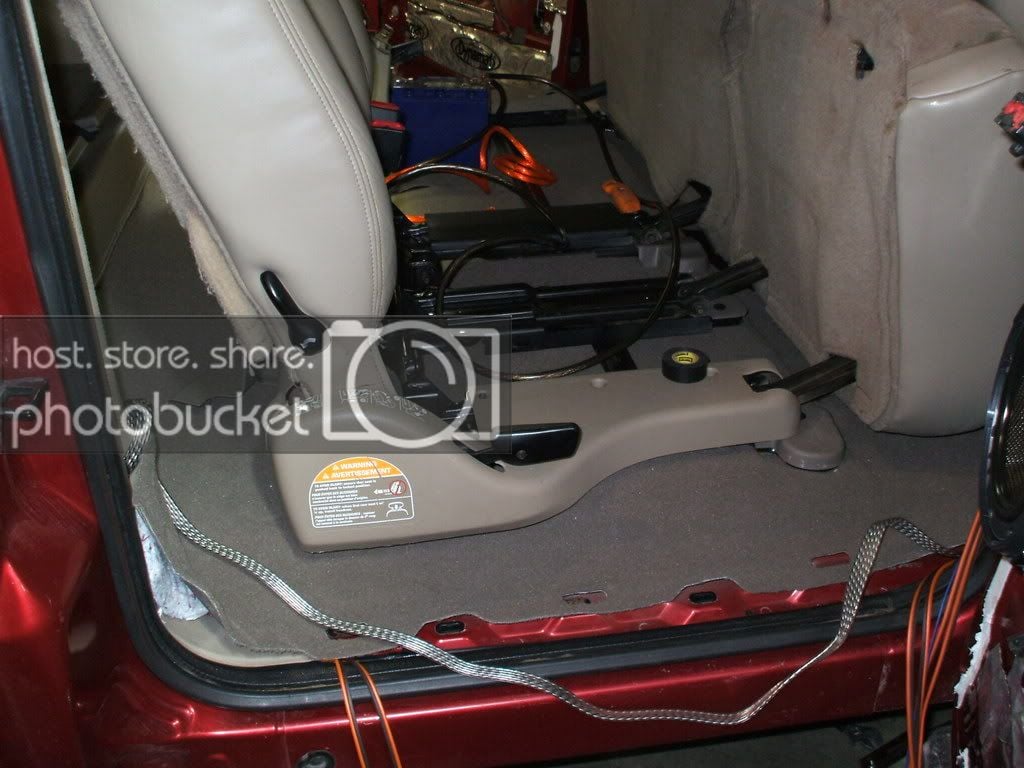 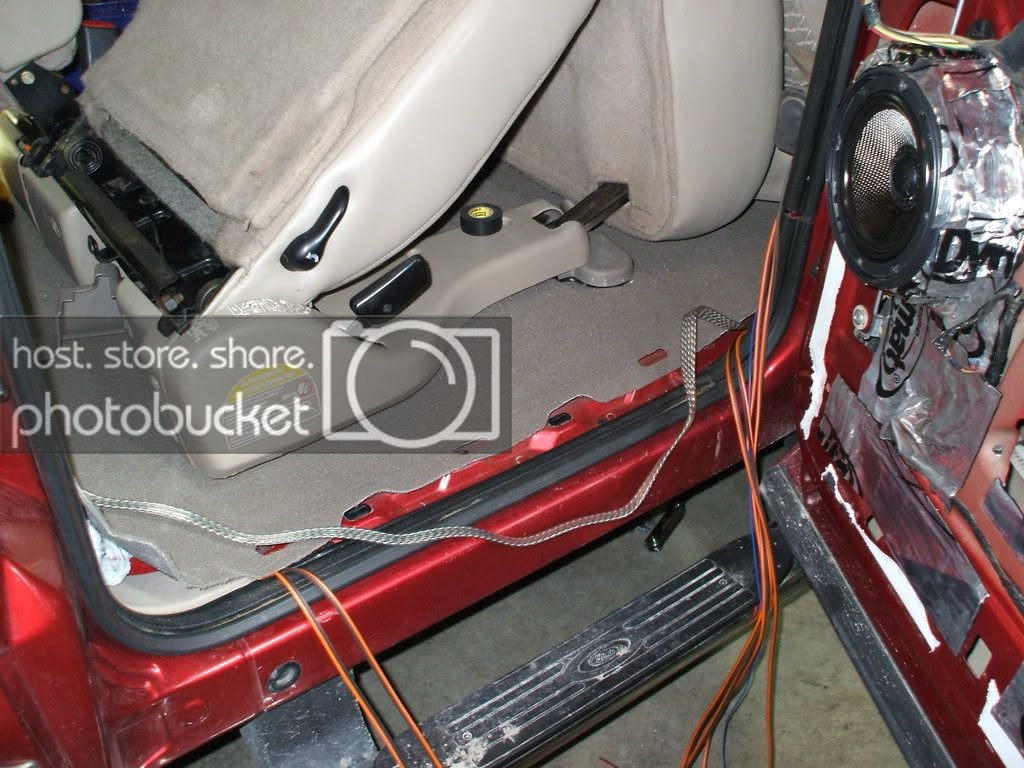 also, i didnt get a picture, but you can kinda tell in that last one, we dynamat'ed in the entire door, the one in the picture is obviously not done, we did in fact cover the entire skin.

as for in the back, i needed something that didnt look out of place. but it also needed to be removable in the interest of the owner (i guess if he ever decided to put the 3rd row back in) so i put this together; 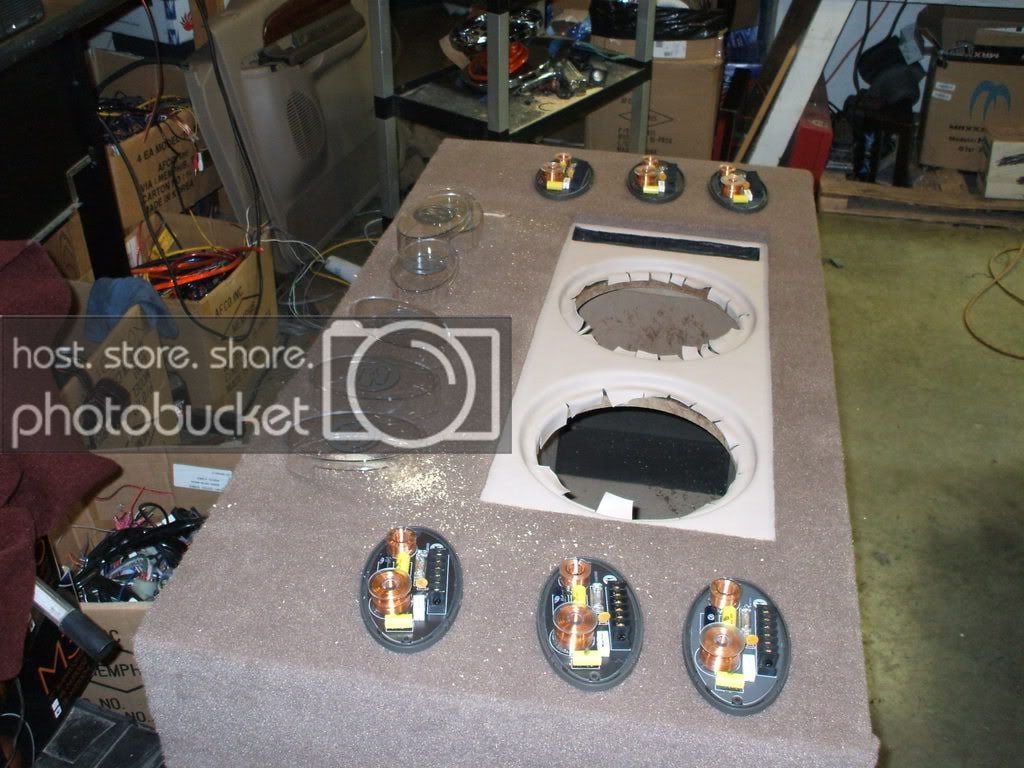 it was easy and a nice addition to the system, it gave me someplace to mount the xovers for the door speakers as well as a nice piece of custom work that the customer will surely show off, and tell everyone he knows about it.

and for those of you wondering, yes those are 10" holes in that box, for the sub bass, we chose to just do a set of 10's and keep it real tight, but at the same time the customer wanted the ability to feel the bass in the vehicle. so i used a set of M3's and with the amount of cabin space, they sound like a 15. 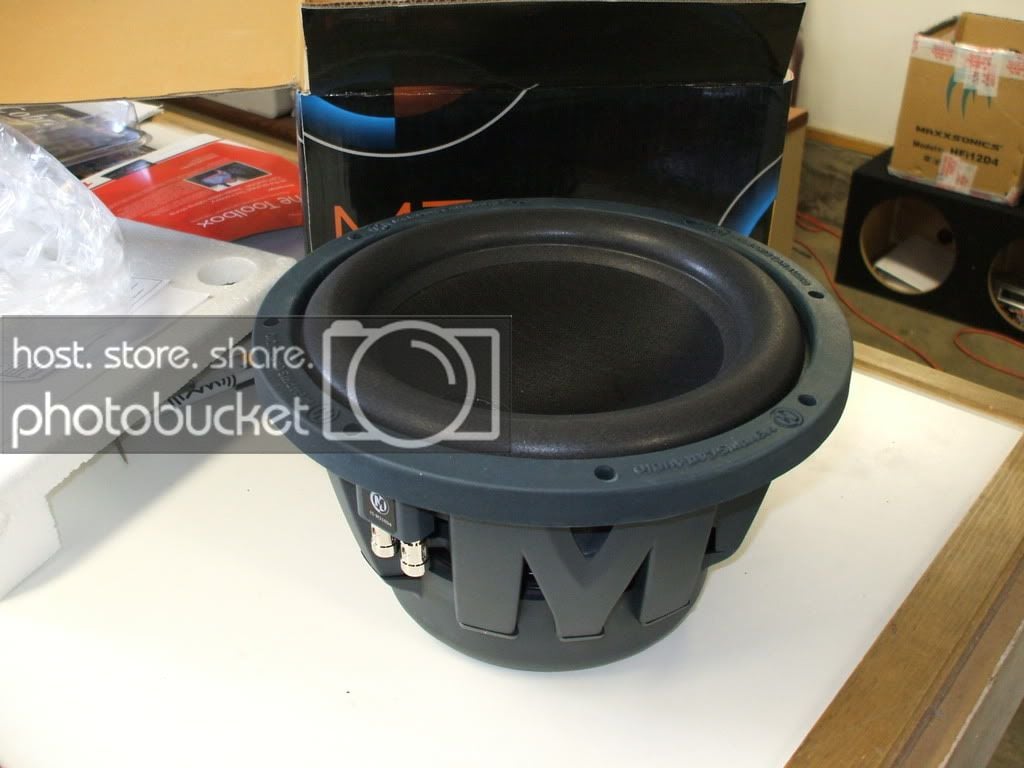 and to drive the whole system, the memphis belle 1300, pretty much self explanatory, 5 channel 75watts x 4 at 4ohms like the front msyncs 115 x4 at 2ohms, like in the back. and on that 5th channel we have 1100watts rms at 1ohm to drive the life right into some subs.

so heres a picture of the completed rack/box, oh yeah, that box is actually just one of the new memphis boxes with some naugahyde pulled across the face, and then just mounted in that larger amp rack box turned out a lot cooler looking than i even originally thought, and i barely had to design a single thing 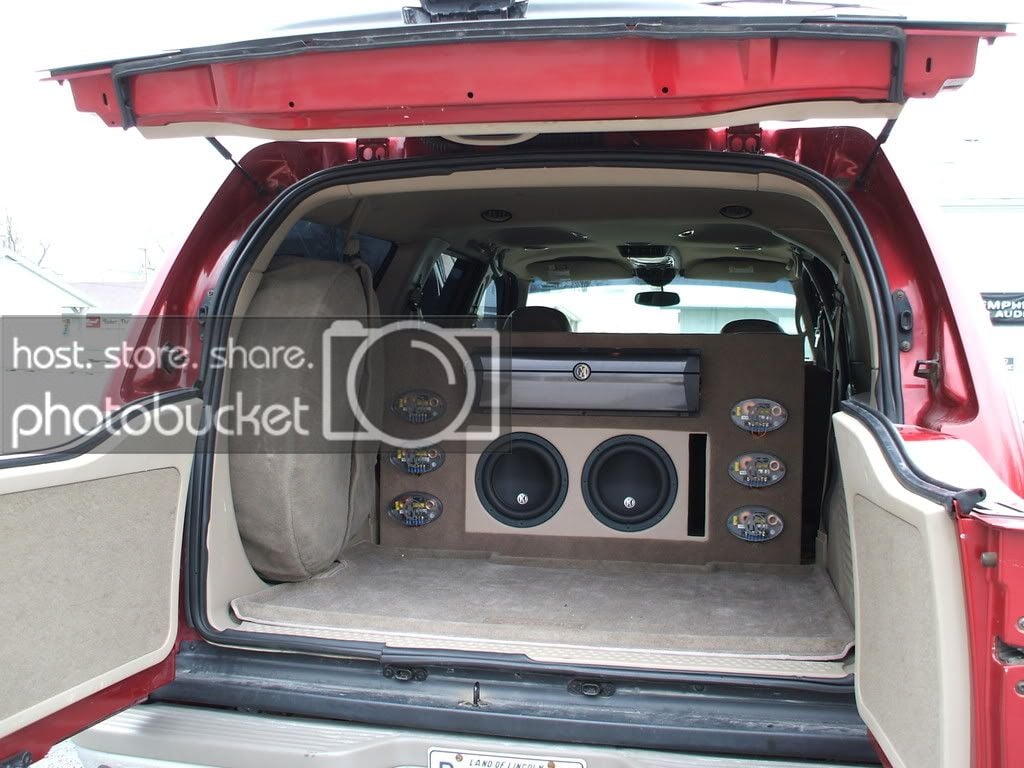 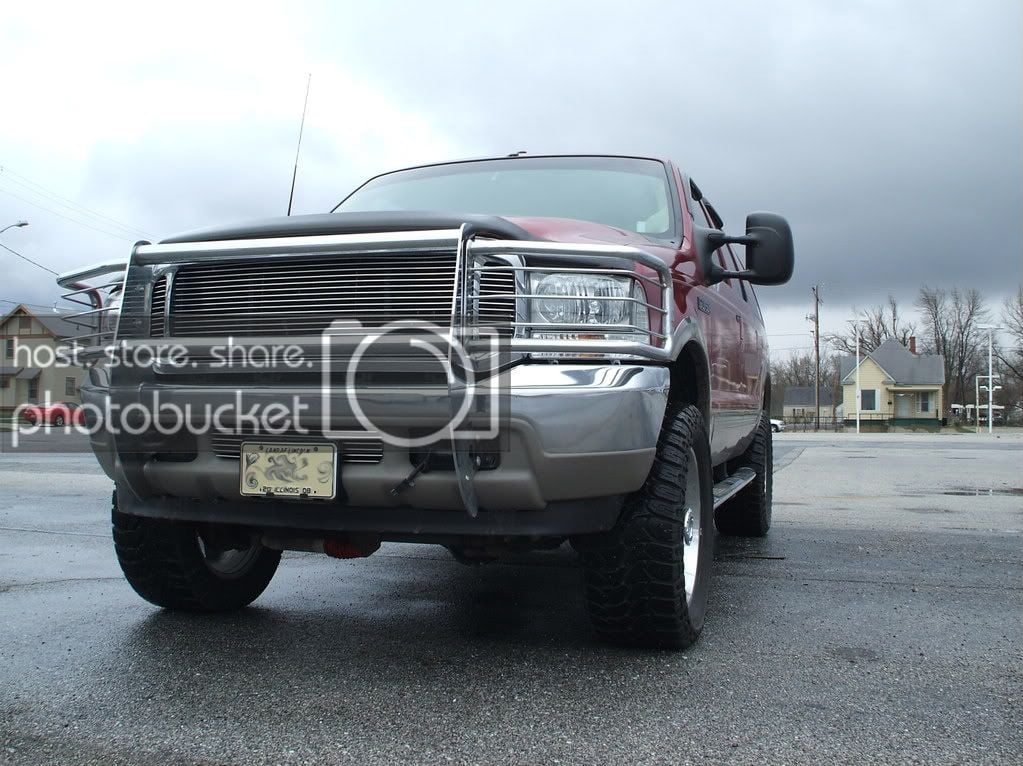 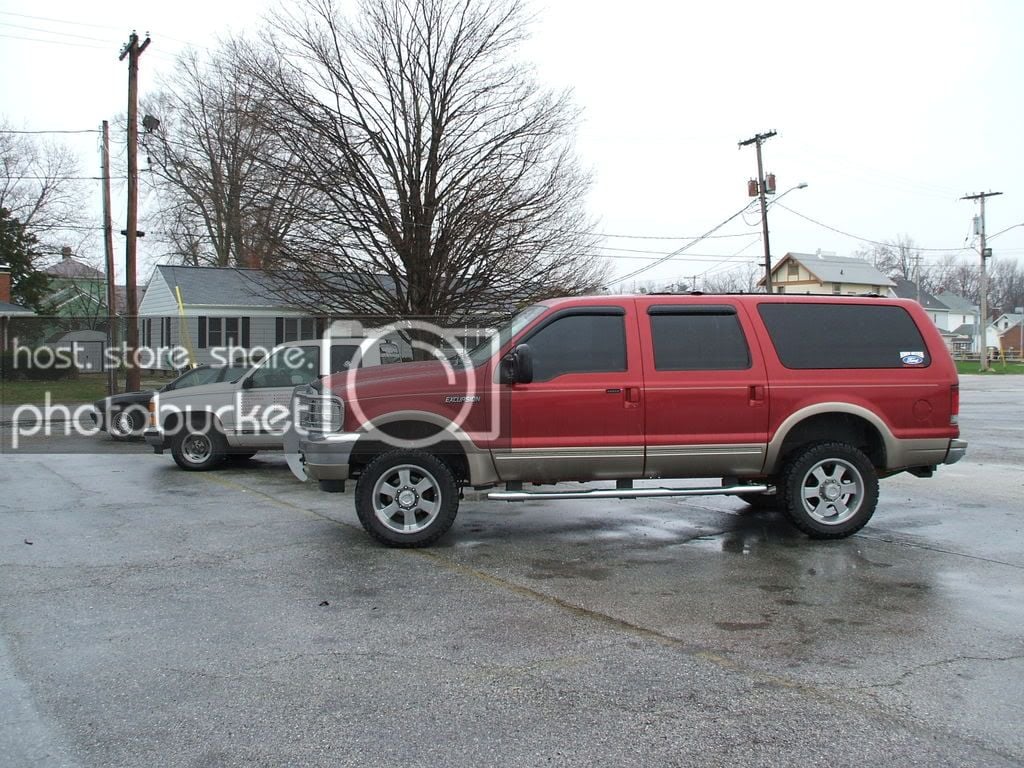 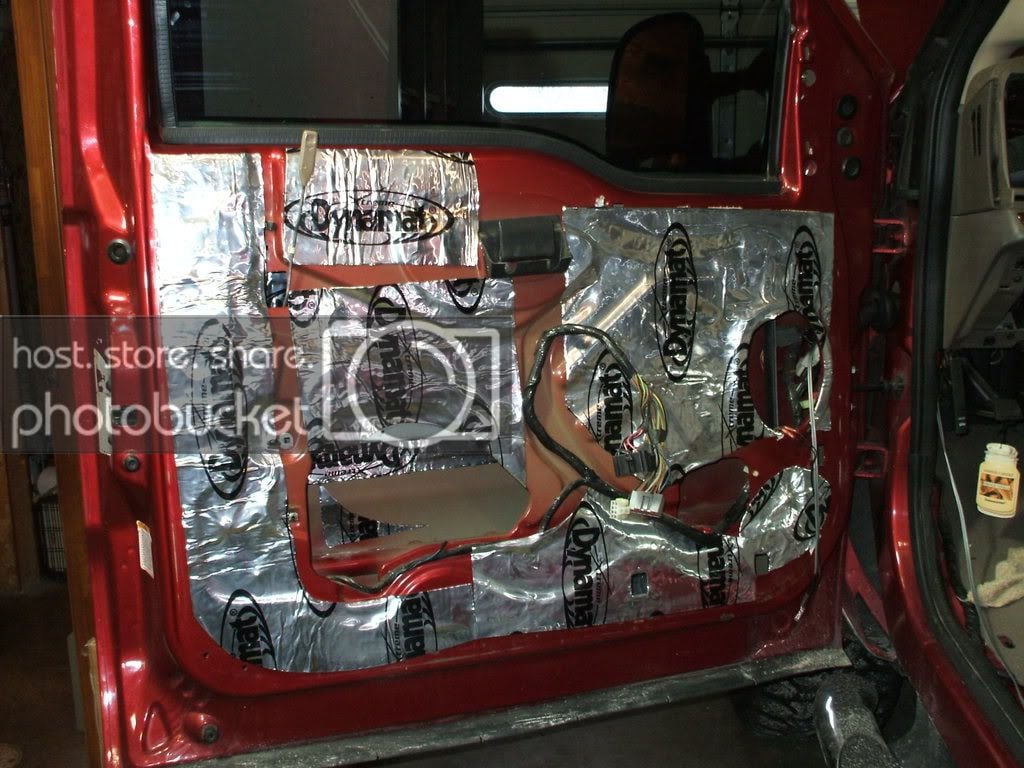 door still not done in the picture, half a** photos but yeah, you can see the factory opening that i just covered up with a plate and used to mount the new speakers in the front doors.

also if you notice the gray memphis speaker wire ran inside that drivers door, and in the later pictures you can see that i used the new memphis wire ran in pairs to separate out the woofer from the tweeter, also so i could mount the xover in the back that was an insane amount of time to get those through the boot, for just a couple wires

Nice. Does anyone else see the crack pipe in the first pic?


Randy Savage said:
Who else do you want banned?
I can discount on multiple user bannings.
Click to expand...

Nice. Does anyone else see the crack pipe in the first pic?jk
Click to expand...

nice find! how the Fk did you see that!

"You can't compare, don't stare, cause I got the ultimate Mary Jane"

Nice. Does anyone else see the crack pipe in the first pic?jk
Click to expand...


Randy Savage said:
Who else do you want banned?
I can discount on multiple user bannings.
Click to expand...

HOW WE DO IN NY

hmm, that must have been my crackpipe i left in there

Looks good, simple, yet I bet it sounds awesome!

Nice. Those M Syncs have some harsh highs, I had a couple sets.

Installer/fabricator at After FX Customs in Stamford, CT

why three sets of components?

thats quite a bit much for anything shy of a limo. imo - two sets of comps is overdoing it. but thats just me. and me does not sit in the back seat lol.

good for a budget install that prolly costed a fortune in a shop tho //content.invisioncic.com/y282845/emoticons/crap.gif.7f4dd41e3e9b23fbd170a1ee6f65cecc.gif

love the look of the new memphis subs. clean install... lotta comp sets, must be insanely loud and sharp.

it is very sharp, ill admit it i had to 1st order the top end to get it not to burn your ears. but the reason for all the components and the real reason for the box(and not just putting the amp under the seat), is that this car sees shows, not for its self but it is the tow truck for a drag car, but the owner wanted it to just get crazy loud while they are not even in it.

we are going to do the trailer also for these guys in a few weeks, not as extreme, but still some alpine marine mounted on the sides small amp and something simple for the headunit.