Hey everyone, it's been a while since I've done a build log. I've been extremely busy with a couple of long term builds as well as getting my new sound damping brand, ResoNix Sound Solutions www.resonixsoundsolutions.com ready to launch, but that's for a different post. For this post, we're going to be focusing on this 2019 Chevy Silverado High Country that came in for a pretty sweet sound system. This time it consisted of the following..

Hey Andrew, while you may have not been able to get some ResoNix on your car, you can still count yourself lucky that you were able to get the last of my supply of SDS. Front door outer door skin with approximately 85% coverage & Black Hole Tiles, and inner door skin with all holes sealed and deadened. Not pictured was the prototype polyester fiber batting material i have previously mentioned. 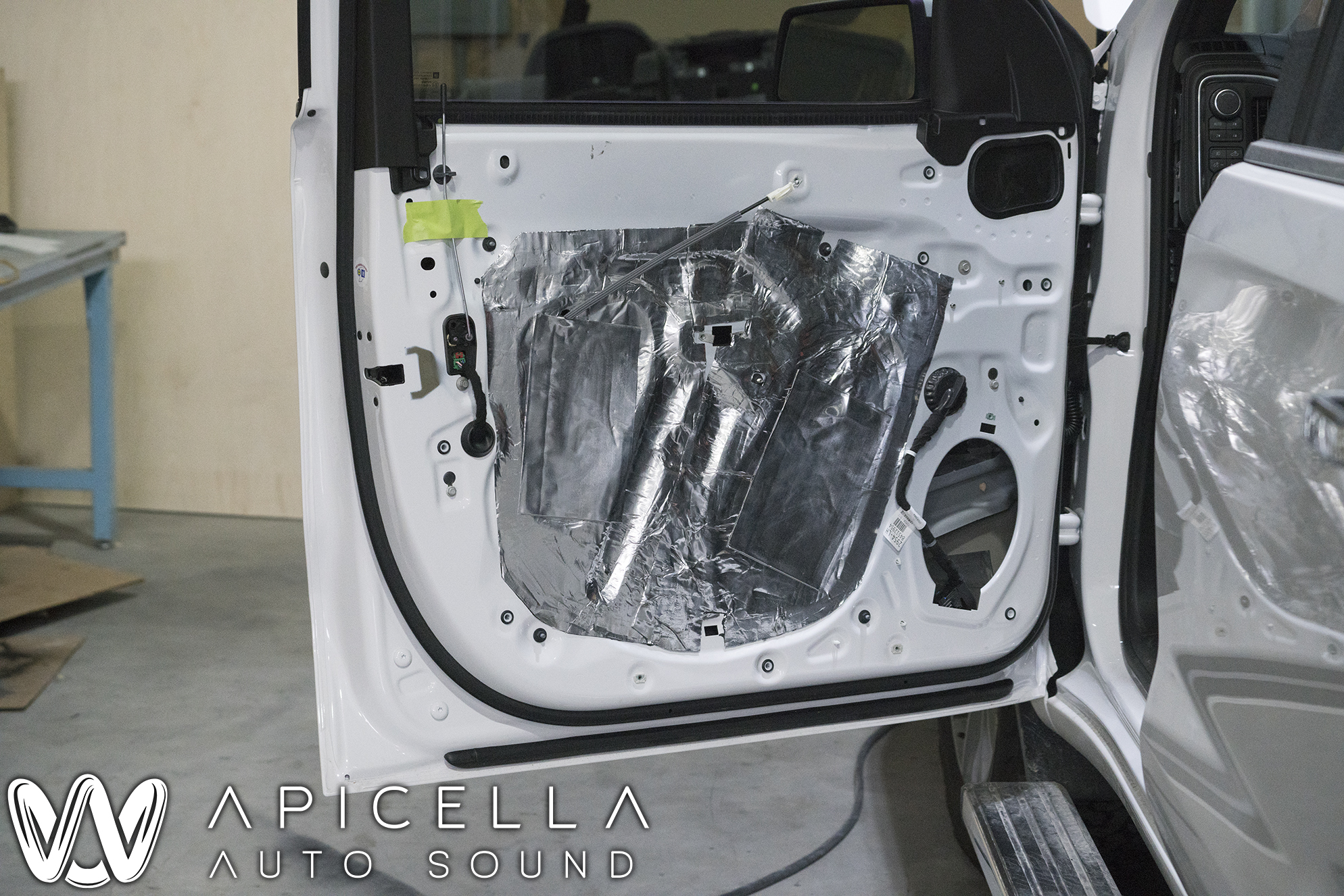 The Audiofrog GB60's mounted on a 3 layer PVC baffle that matches the OEM shape. What you can't tell from the photo is something that Chevy has been doing with their 6x9 baffles for years.. making them "slide" in and have one screw holding it in. We obviously couldn't mimic that so we used four extra stainless machine screws with riv nuts for easy servicing and a not-so damaging solution. After the GB60's were mounted, we used half inch closed cell foam to create a ring that seals them to the door panel and "couples" them to the cabin of the vehicle.

Side note.. while we didn't make an A/B comparison, this build has made me even more of a believer in the Black Hole Tiles. When I was demoing the car for Andrew and sitting in the passenger seat, I put my head down near the midbass and have never heard these things pounding away like they were but having no sort of coloration from the door. I can't attribute it to them, but I'm not sure what else it could be. Maybe coincidence, maybe the poly fiber mat? But both of those don't make much sense to me since we used *many* of the tiles in this build. Over 45 if I remember correctly. 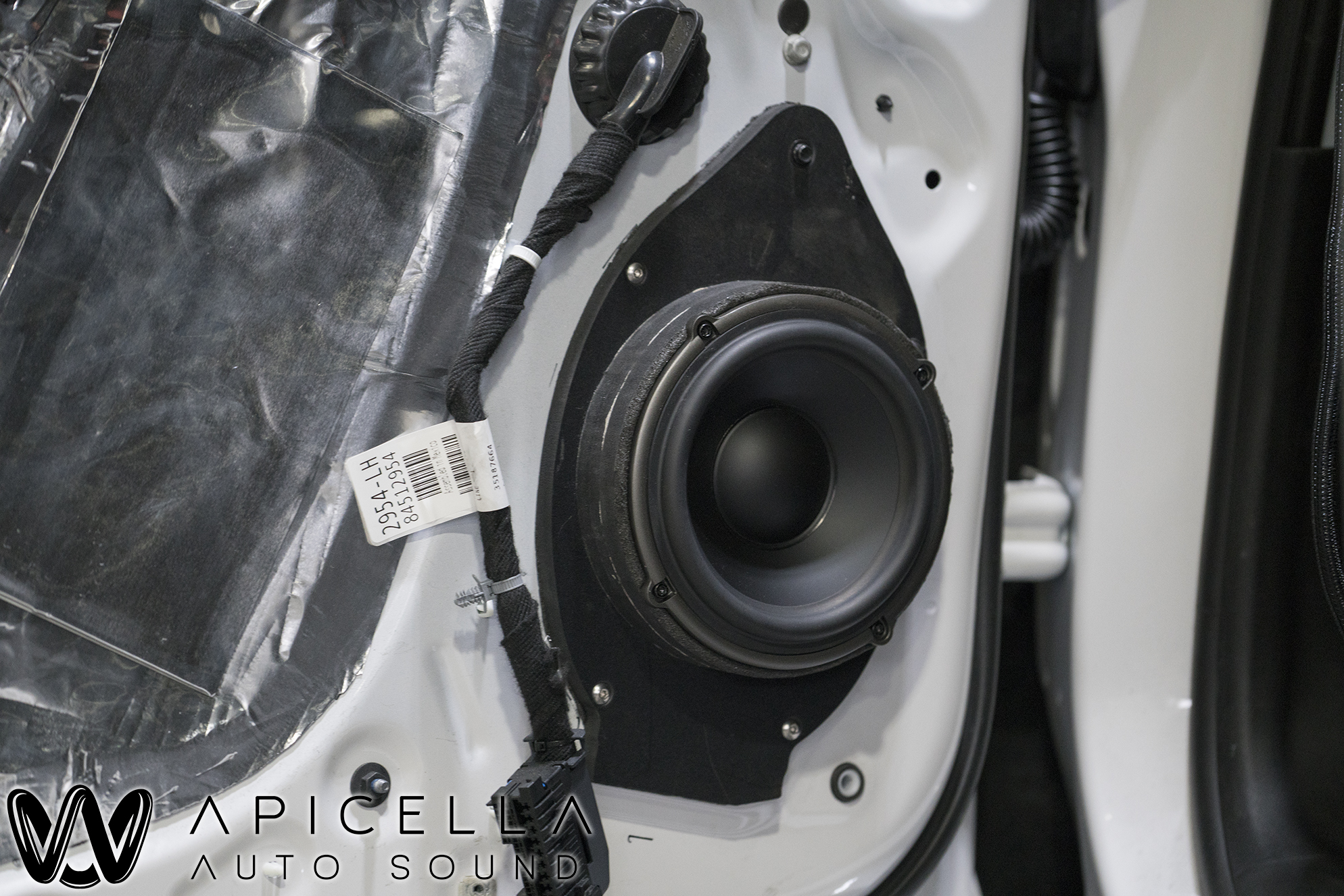 The rear door got the same treatment, even though I told Matei to only "spot treat" the rear doors. I guess he translates the saying "spot treat" into "leave no spot uncovered" lol. After this, it also got more deadener and full coverage of closed cell foam, as well as CCF rings. 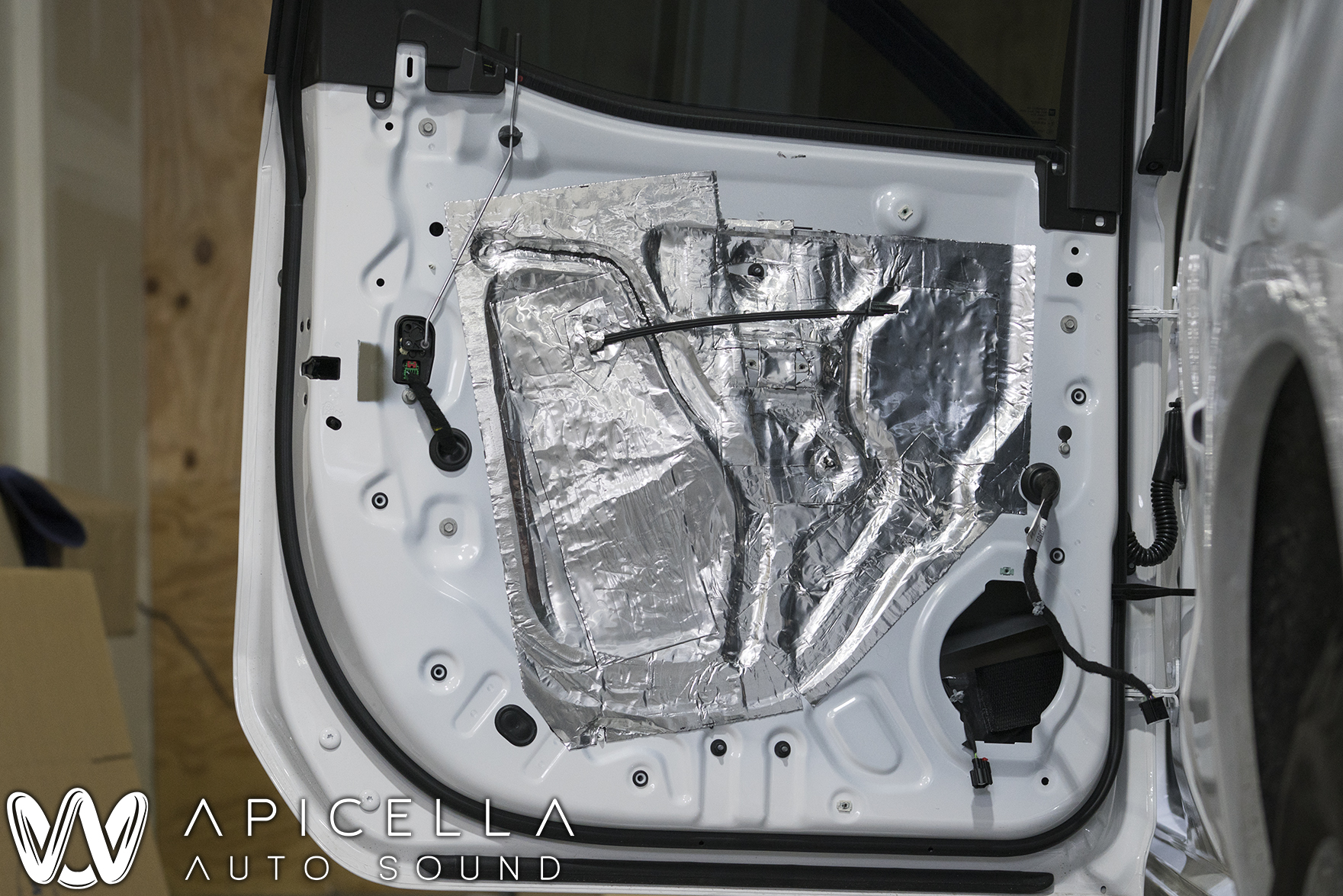 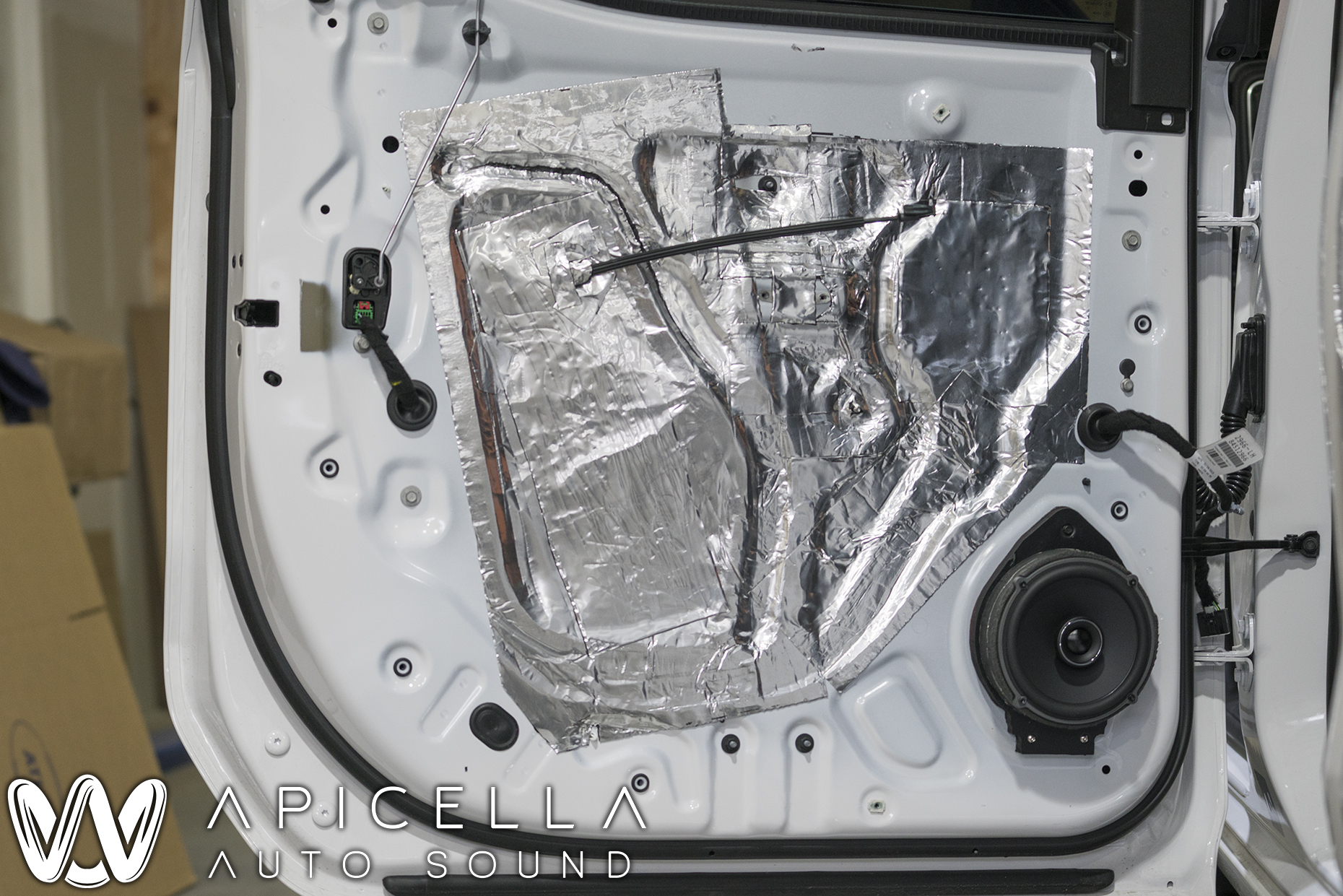 Heres what makes this build "100 lbs into nothing" and where Matei really shined. If you are familiar with the Mosconi Pro 5|30 you will know that it is by no means a small amp. Couple that with the fact that there is zero space available from the factory to put these behind the seats. We found a way without cutting anything permanently, and without cutting any wires using welded racks, OEM hardware, and stainless machine screws with riv nuts. For starters, the rear seats do not fold down in these trucks. Why? Because who the hell knows why. What I do know is that the guys at GM don't want to make our lives easy. Here is the rear wall as it comes from the factory. This is a photo from my friend John Brettle down at Car Tunes Atlanta. I forgot to get my own picture.
We relocated the DC/AC converter to the drivers side and used the welded amp rack to hold the 5|30. The 5|30 is secured to the frame via tapped threads and stainless machine screws in the right angle stock we used. The rack was held in at OEM mounting points as well as a few riv nuts with machine screws. You can see the converter relocated to the driver side with a bracket and secured down with some OEM hardware, tapped threads in the custom bracket, and riv nuts.

ps, ignore the blue protective film on the one strip of the amp. 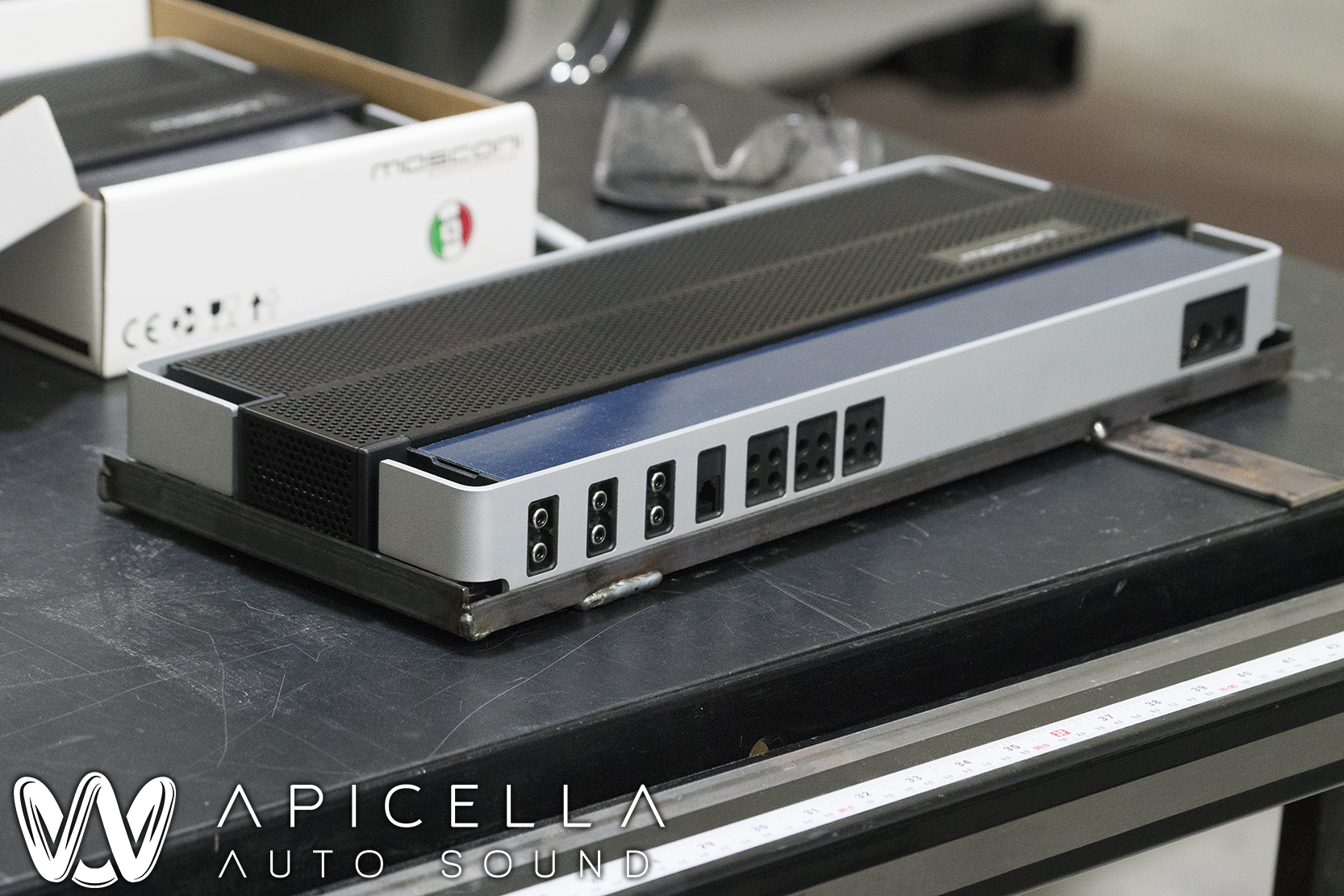 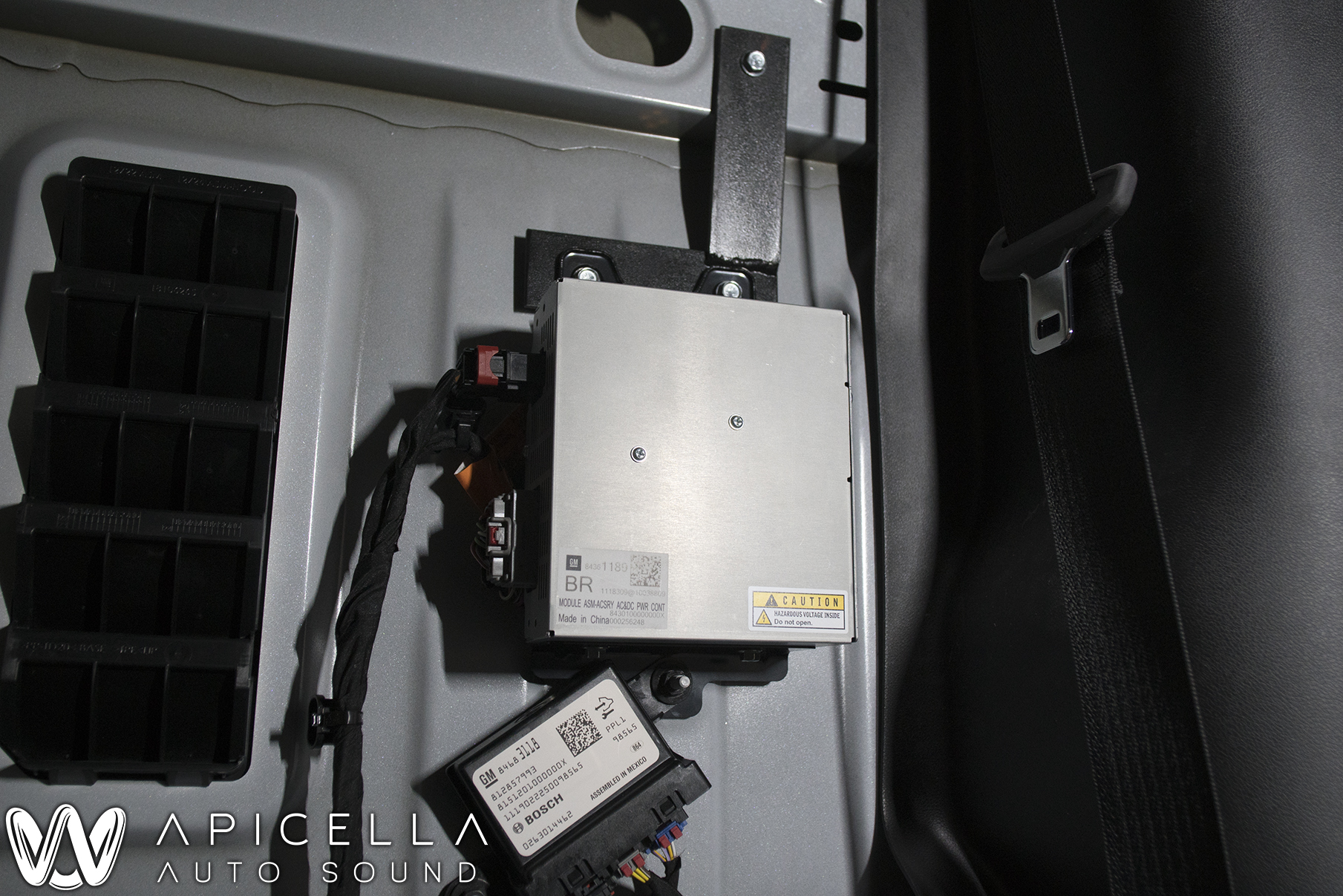 Here is the top of the enclosure that MTI Acoustics makes for this vehicle which features a small pocket in which we housed the Mosconi Pro 4|10 and the Helix DSP Pro Mk2. The DSP was mounted to a bracket that was built around and over the amp. Side note, if you do this combo, we were able to do the "DSP direct" feature with the amps which bypasses all preamp circuitry, including gain. The voltage out of the Helix was more than enough to get the volume we knew was possible from this setup. Since no pre-amp solutions have been released for this vehicle yet we had to use post amp signal for Andrew to have use of his OEM radio. Here is a copy/paste of a post I made in an OEM integration group about what we did for this specific vehicle with this particular audio package (Bose from the factory). "2019 Chevy Silverado with Bose (or GMC Sierra). Since nothing is available for integration yet, we used the high-level outputs of the factory amp. Sub woofer and midbass received front door signal, midrange and tweeter received dash speaker signal. There is low end roll off which was easily fixed with input eq, and some other minor things that needed to be corrected with input eq but nothing crazy. The only thing to worry about was what seemed to be an all-pass filter on one of the front midbass signals. Wasn't much of an issue since we low passed those at 250hz though. Sorry, no pics but I can post a screenshot later of the input eq we used to correct the OEM signal to match a direct input signal :/ " 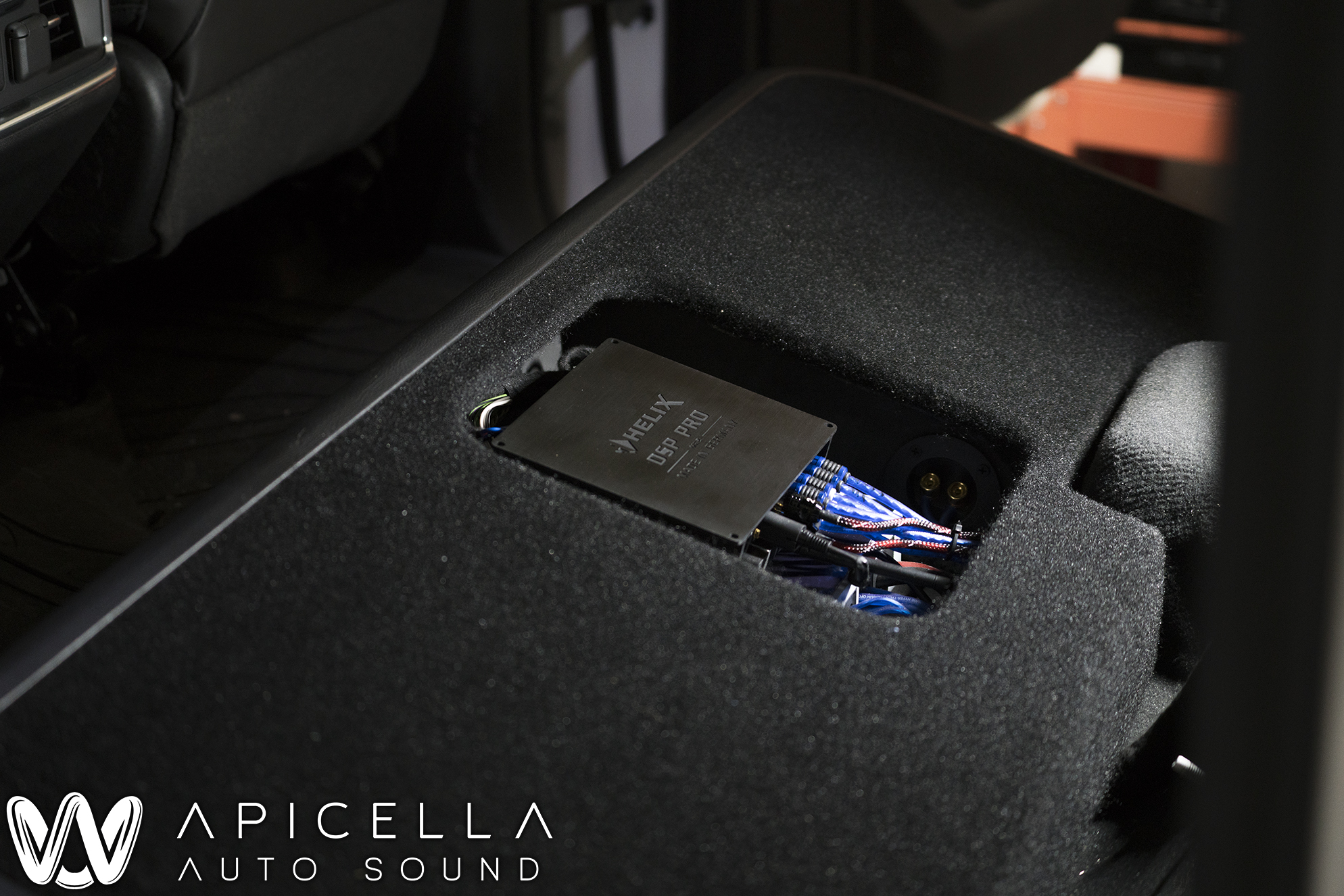 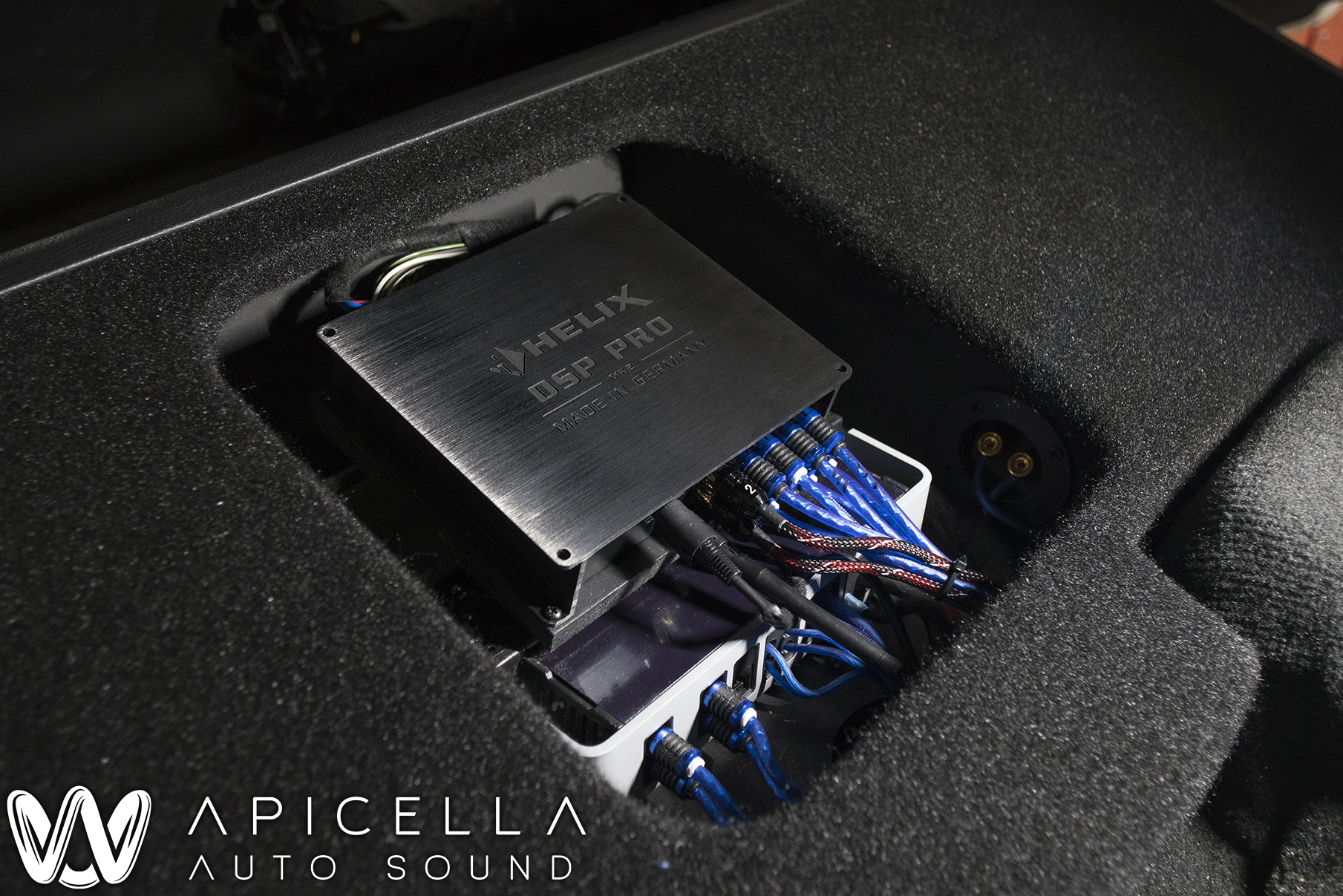 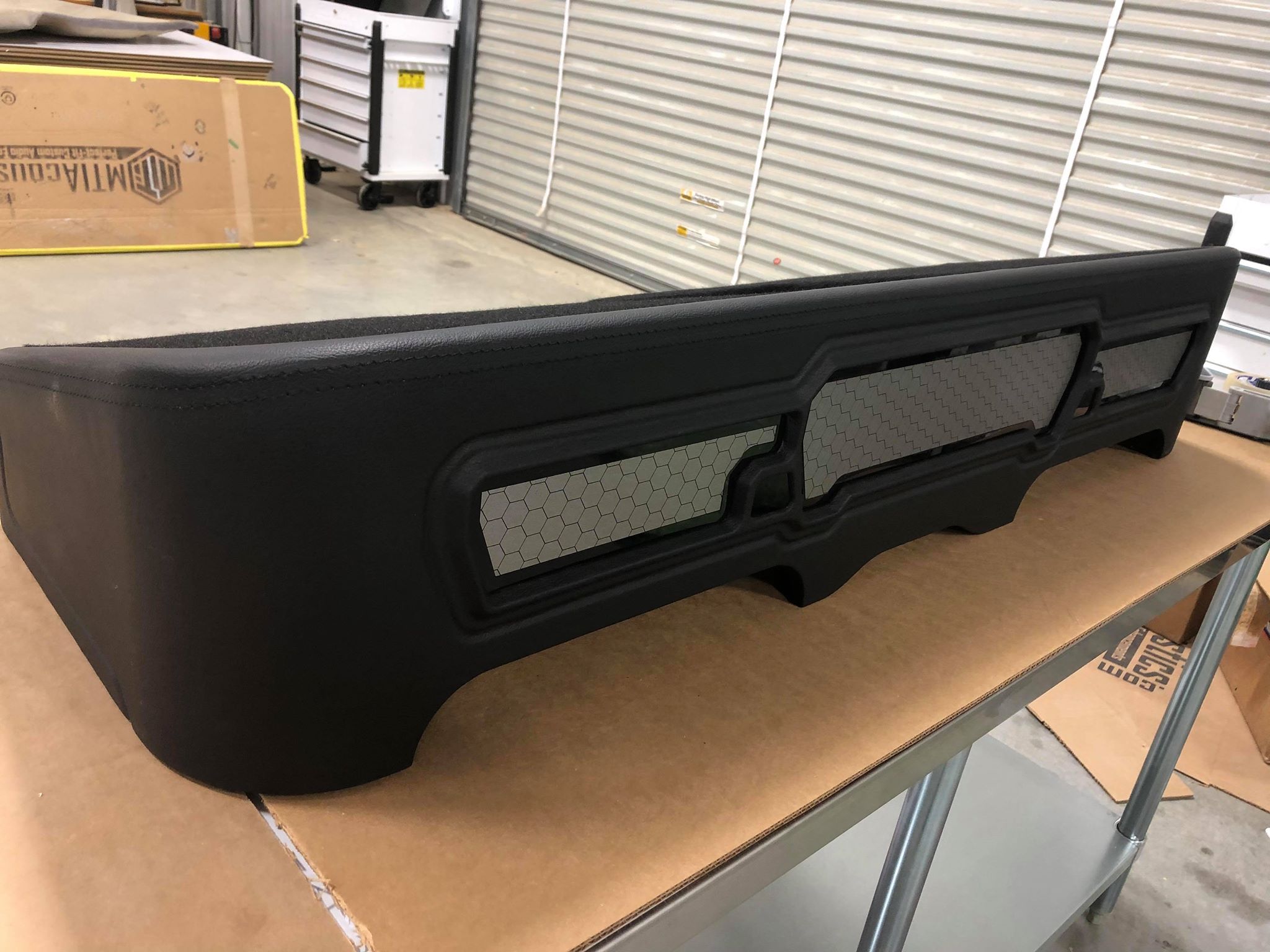 The start of what puts the semi in "semi-stealth." We had initially planned on OEM midrange locations for the GB25's and sail panels for the GB10's, but after having the car finally in front of us, we decided it was best to come up with another solution to meet Andrews needs. We needed it to look pretty much OEM, and not block his vision while driving, as well as still having access to his inspection and registration stickers. Yes, these pods can be entirely removed in less than 2 minutes. This is what we came up with for the pods. First, we started with the OEM dash grill panel and made a template that is the exact shape of the midrange grill. Copied that shape onto a piece of acrylic to use as the baffle, and used low temp PVC to create the lip to flush mount the grill. After that, standard fiberglassing procedure. Stretch, resin, glass, resin, body filler, sand, wrap. 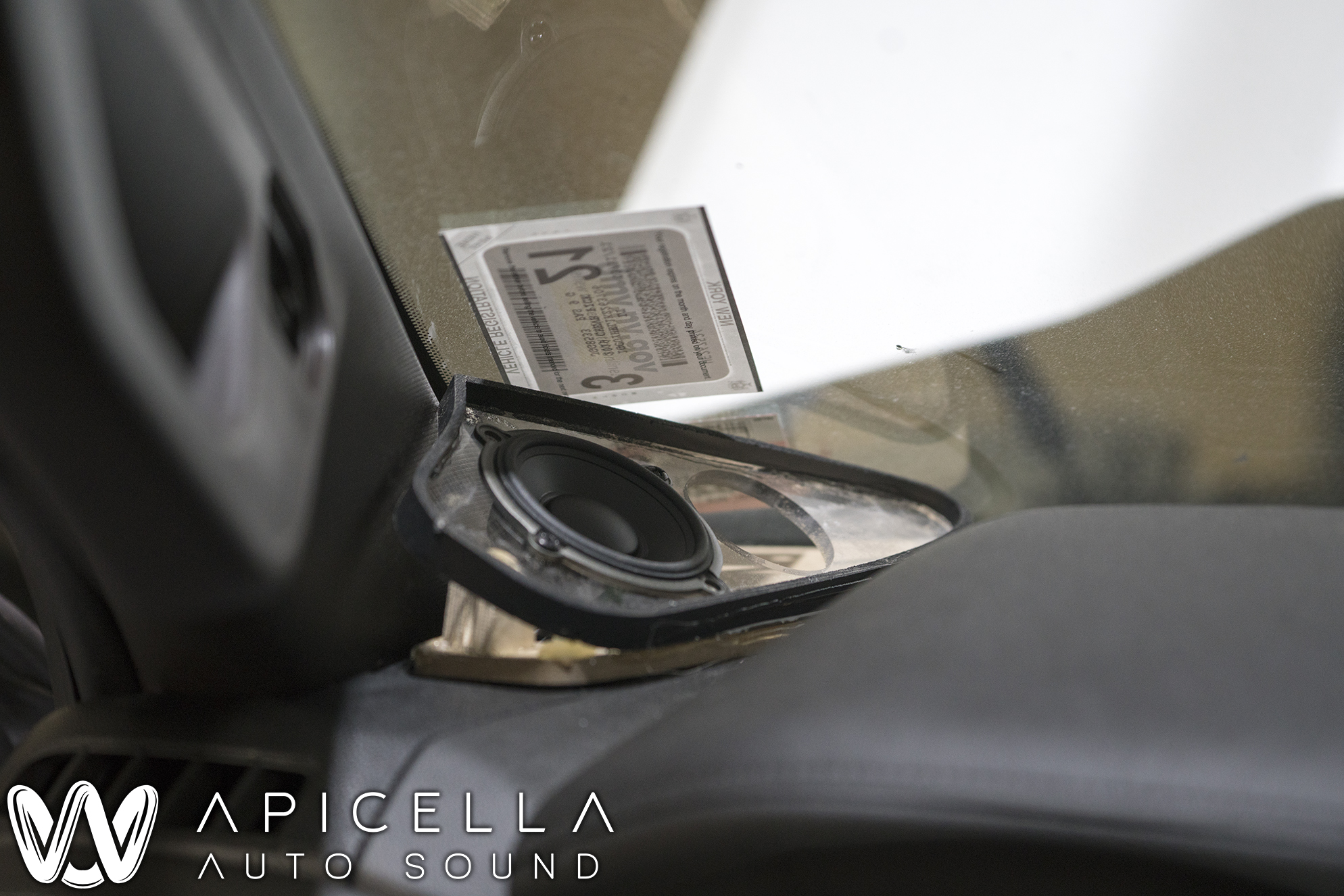 Heres my favorite part.. the grills. My goal for them was to mimic the color and side profile shape as the OEM aluminum trim that's around various parts of the car, like the HVAC vents. I'm missing a few photos from the process but here's a pic of me making the template for the grill trim rings and pressed grill. 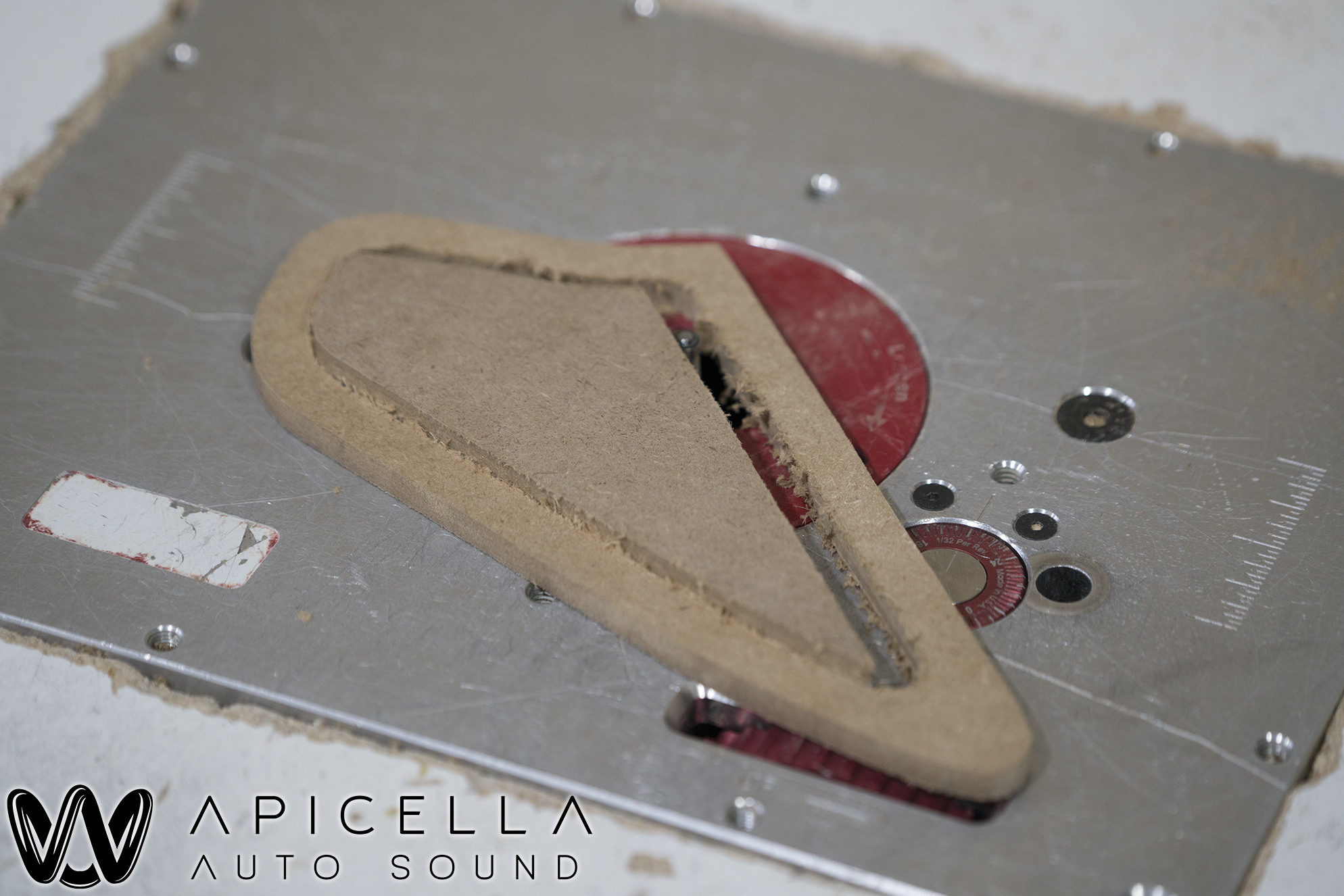 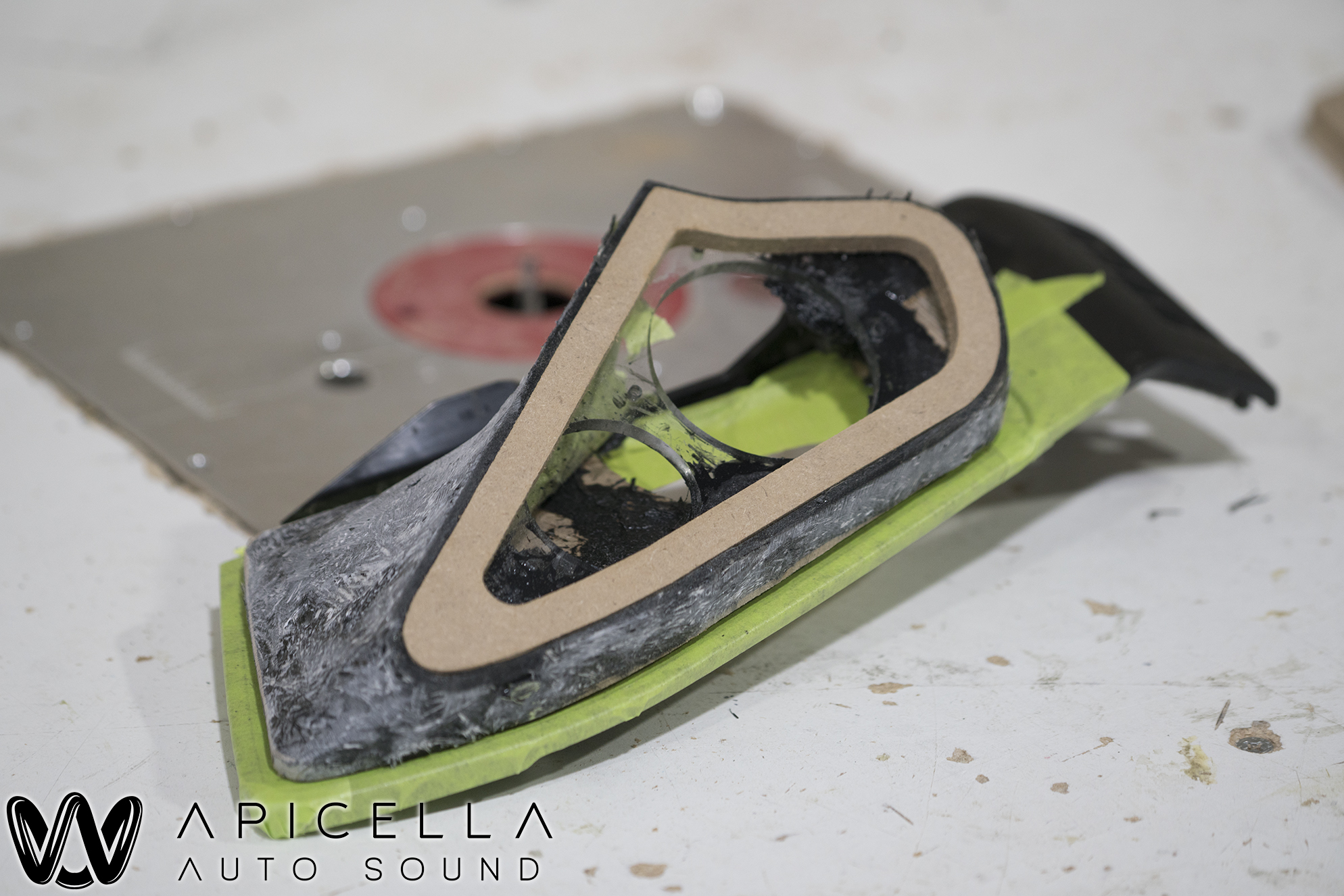 I then copied that shape onto 3/8" acrylic, then did a tiny round over on the outside, and small bevel on the inside. From there, I hand sanded to get the profile I wanted. After that, they were painted to match. We were going to wrap them with matte chrome vinyl, but it had zero stretch. Even with heat and it just wasn't happening. In hindsight, it was better this way anyway since the matte chrome would have reflected sunlight and may have been annoying. I opted for a chrome paint with a low luster clear coat. 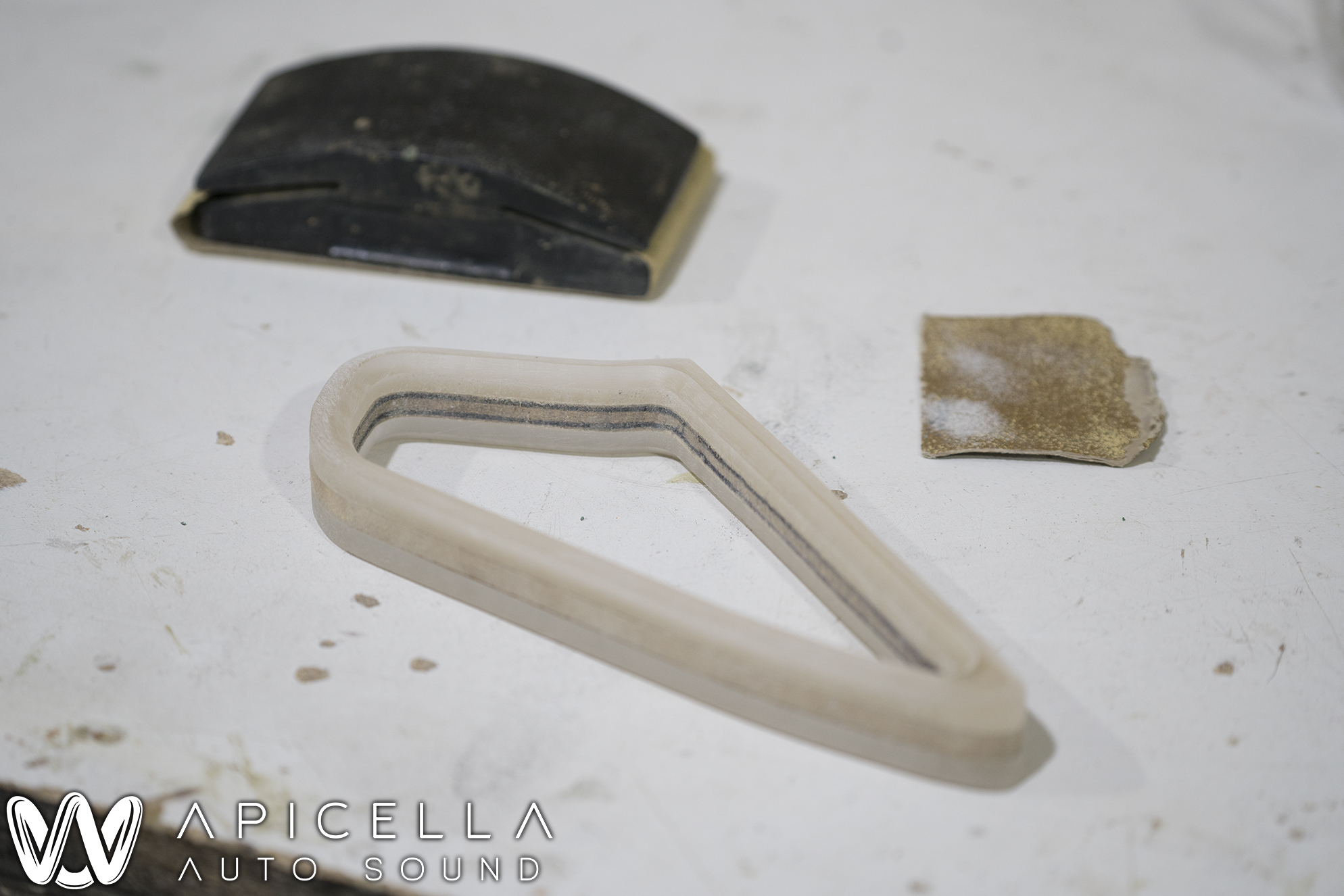 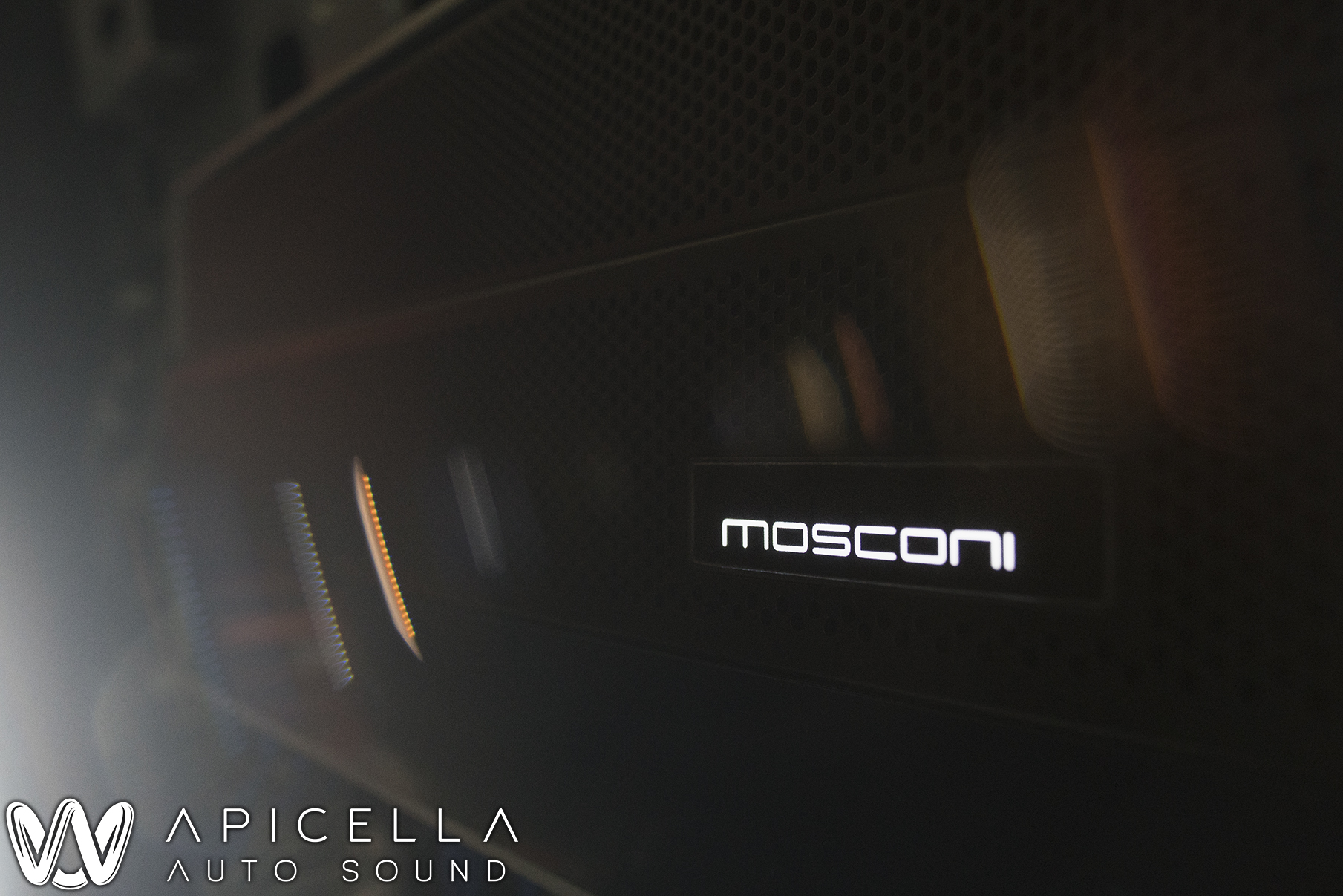 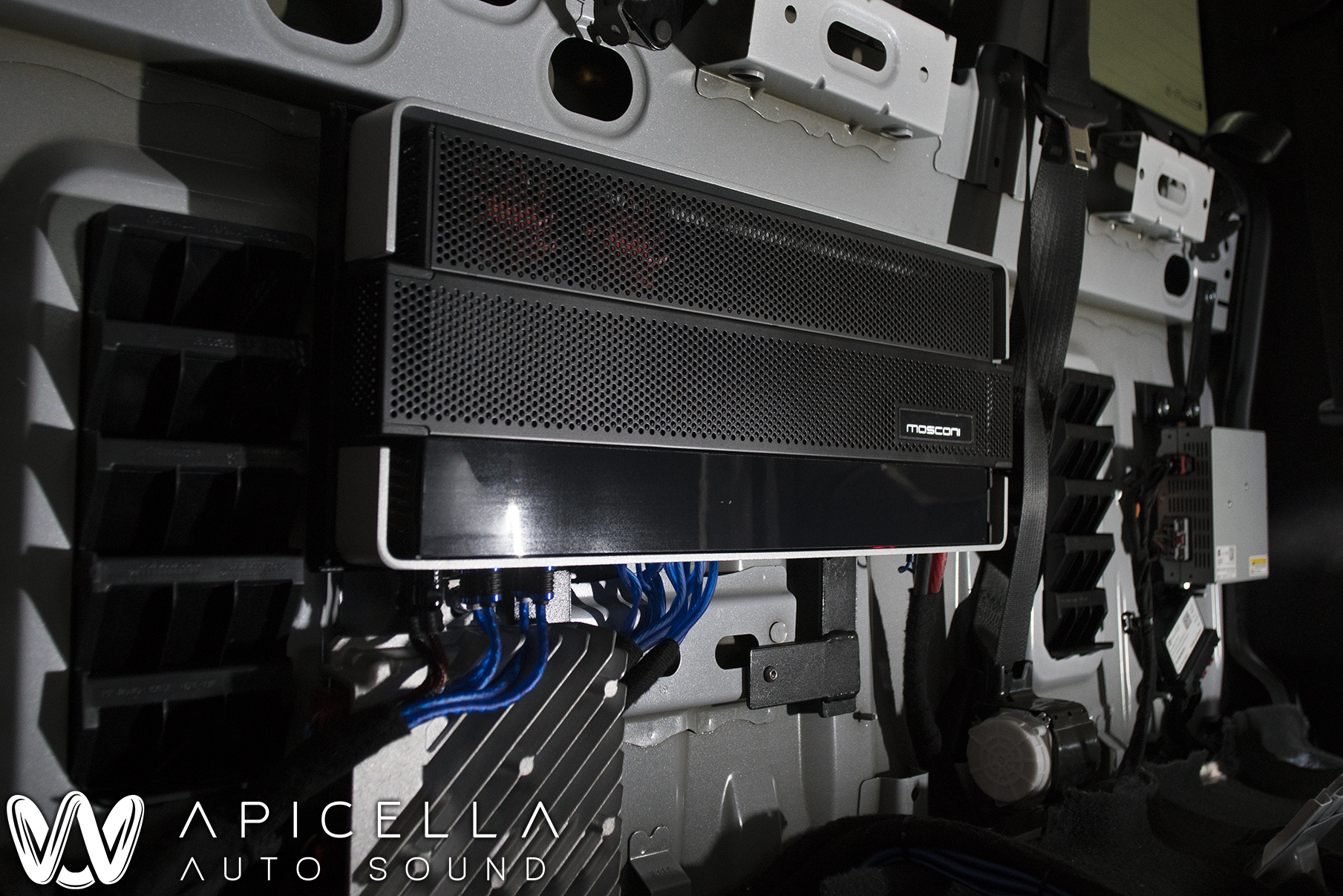 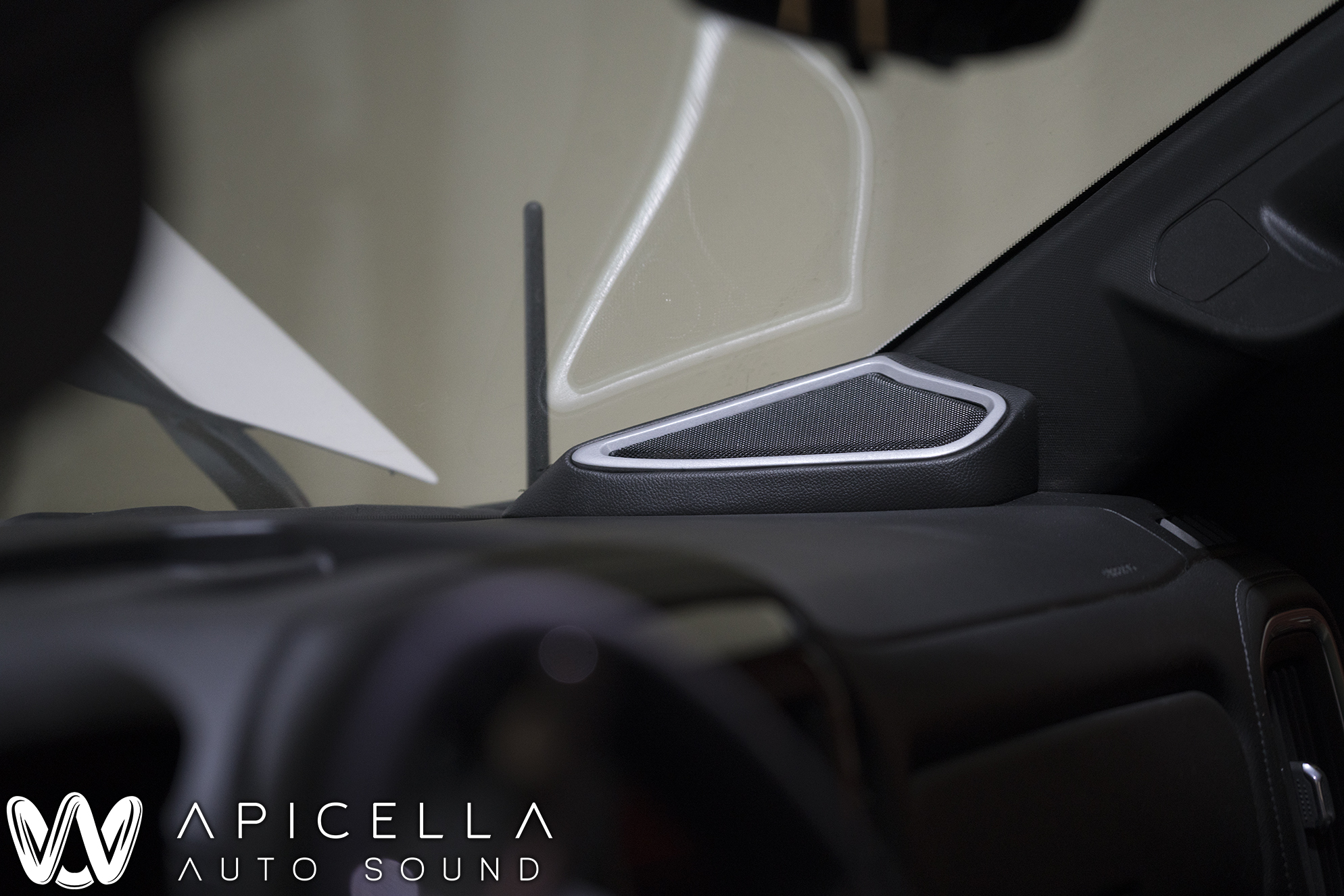 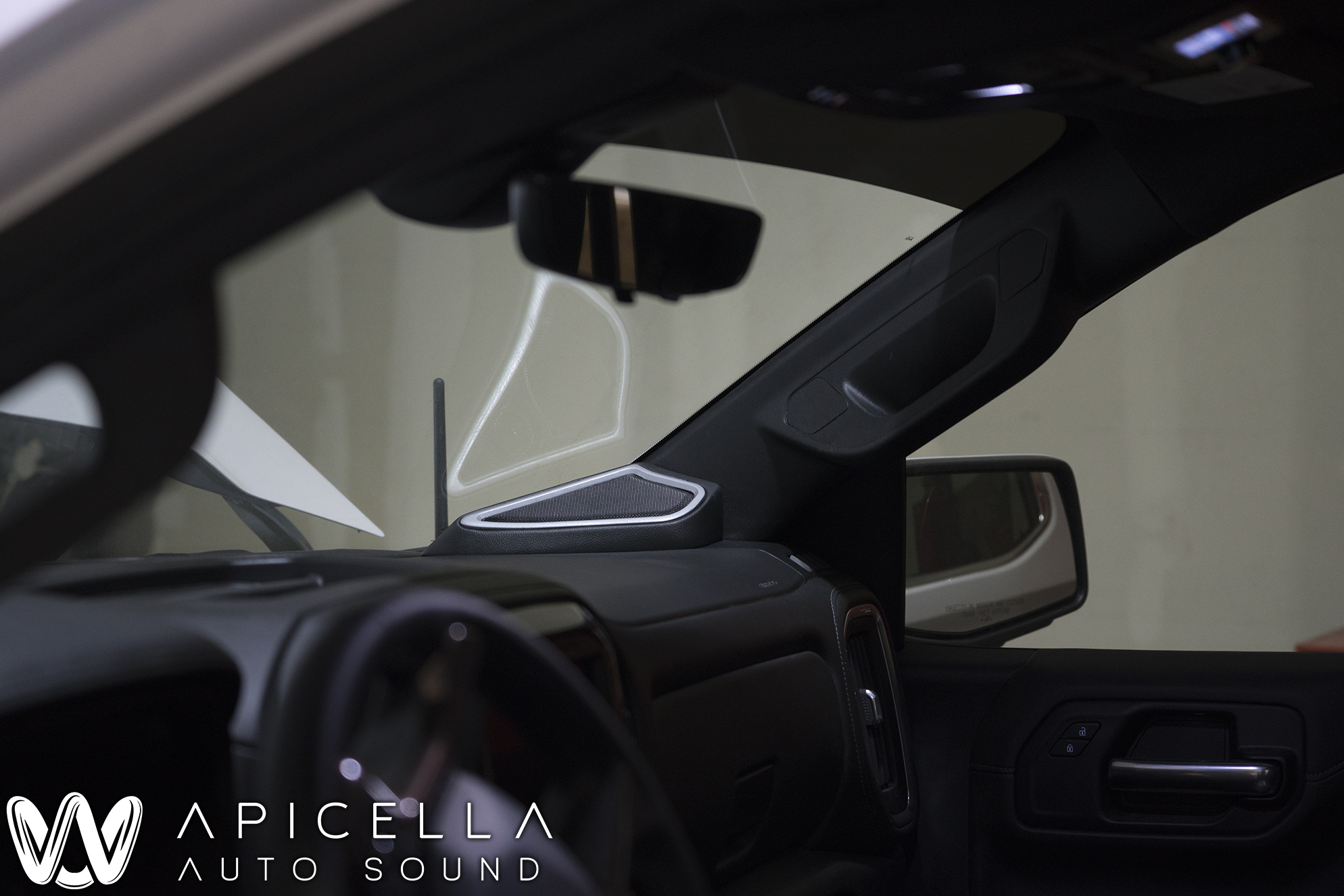 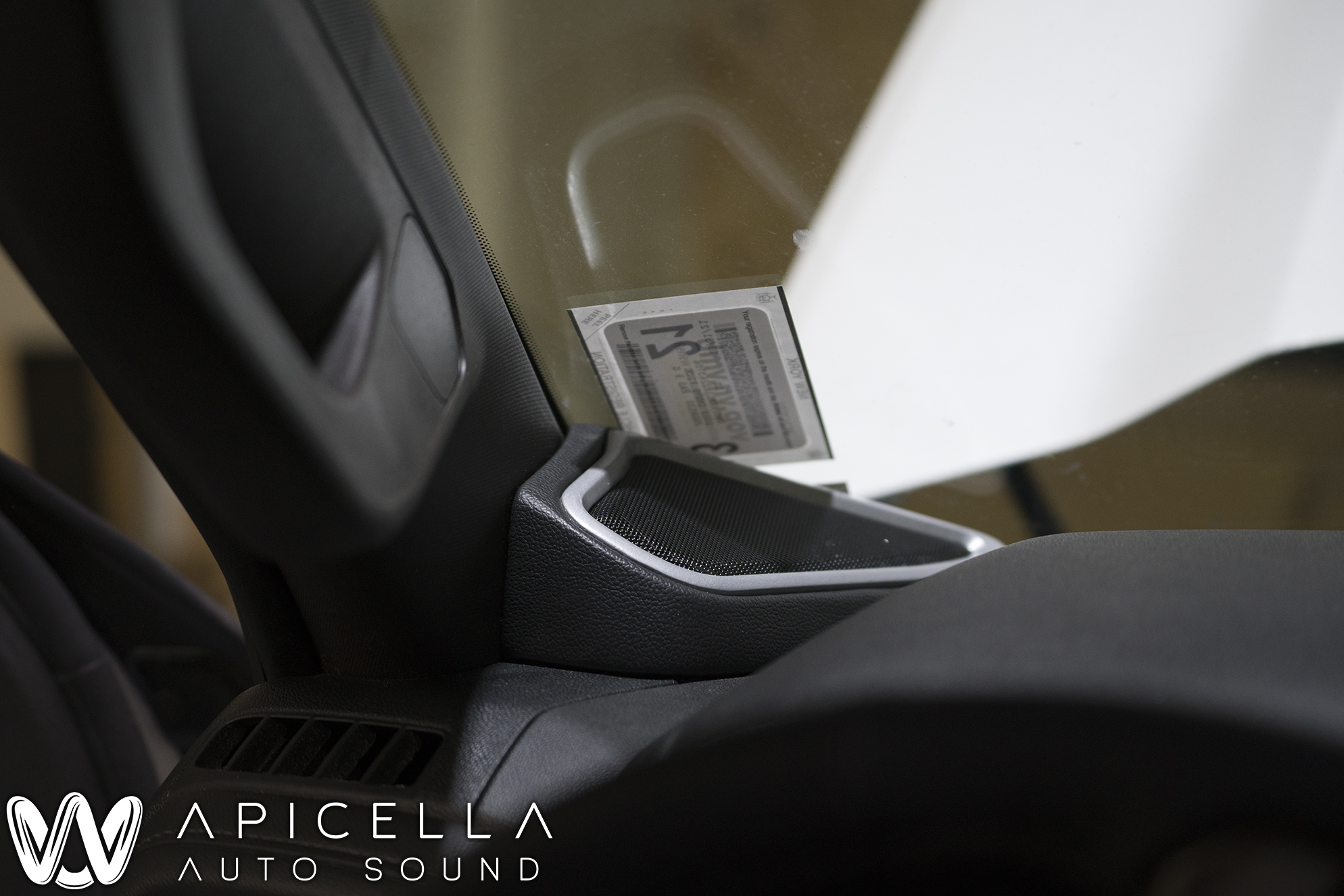