Recommendations on setting up midbass speakers and super tweeters

what size amp and How many channels would I need for this set up? Also do I need crossovers and bass blockers??

Any recommendations would be appreciated! Thanks! 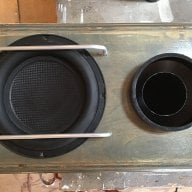 I would run an active crossover or DSP with those. You could use passive crossovers, but speakers are usually tested a lot to see which crossover points work best. An active crossover would let you change it at will. Some head units also come with crossover abilities built in. That may require a different amp, or an extra amp however. The midbass and tweeters will likely need a 4 channel amp to run this way. Using a passive crossover for car audio will allow you to use a 2 channel amp. A lot of those car audio crossovers are set at 3000-3500 hz high/low pass crossover point from what I’ve seen. The high pass to limit the bass to the midbass speakers could be set at the amp.
Last edited: Apr 7, 2021