Wow, cannot believe it has taken me this long to get to this build log, probably the most impressive one we have done to date. This car was done a while ago when Apicella Auto Sound first opened and is even partially responsible for us even having a shop in the first place. Either Paul, the owner put down a deposit for the build and i got the shop, or i would continue to film snowboarding that winter. Paul shipped the car to us from California and wanted something special.. very special. Top of the line everything, all details covered. There are SO many pictures that are missing from this that i have on another hard drive somewhere, but heres the run down.. The entire interior was removed, the whole interior was then sound deadened, all panels above the window line were wrapped in a matching color Alcantara, all wiring run cleanly and appropriately, new carbon trim installed, etc etc.. for the audio system, Paul wanted the best of the best. He supplied us with a pair of Genesis 5 channel amplifiers, and Genesis mono amplifiers, along with some cables from Douglas Connection. From here, we started testing all of the speaker locations we could think of as appropriate for this build. It turns out the dash location sunken in and angled a bit had damn near perfect frequency response and a very clean impulse response without any eq. One problem... there were no dash locations from the factory. Fun.. Here's what we ended up with for equipment

Supporting mods like upgrades alternator, batteries, soundproofing, etc were all added. What you see below is the super generalized summary of what we did. This was to date the most involved build we have ever done, and probably ever will do.

We have an estimated 700 hours into this build between install, fabrication, upholstery, sound-proofing, speaker and speaker location testing, etc etc..

After the speaker locations were tested, construction of the baffles under the dashboard started. There was a metal "tube" at the top of the fire wall that ran across its length that was non structural. This was trimmed at the sides to allow the baffle to sit in/inside of this "enclosure". I used 1/2" Baltic Birch for the baffle, wrapped the mounting areas with closed cell foam, secured it with metal brackets, and sealed all of the small holes left over with sound deadener and butyl rope. All speakers received XT60 connectors. Not shown is the dashboard corners that had to be cut, HVAC ducts re-routed to be out of the way, and grills fabricated.

All audio connections were soldered with Cardas Silver Solder. 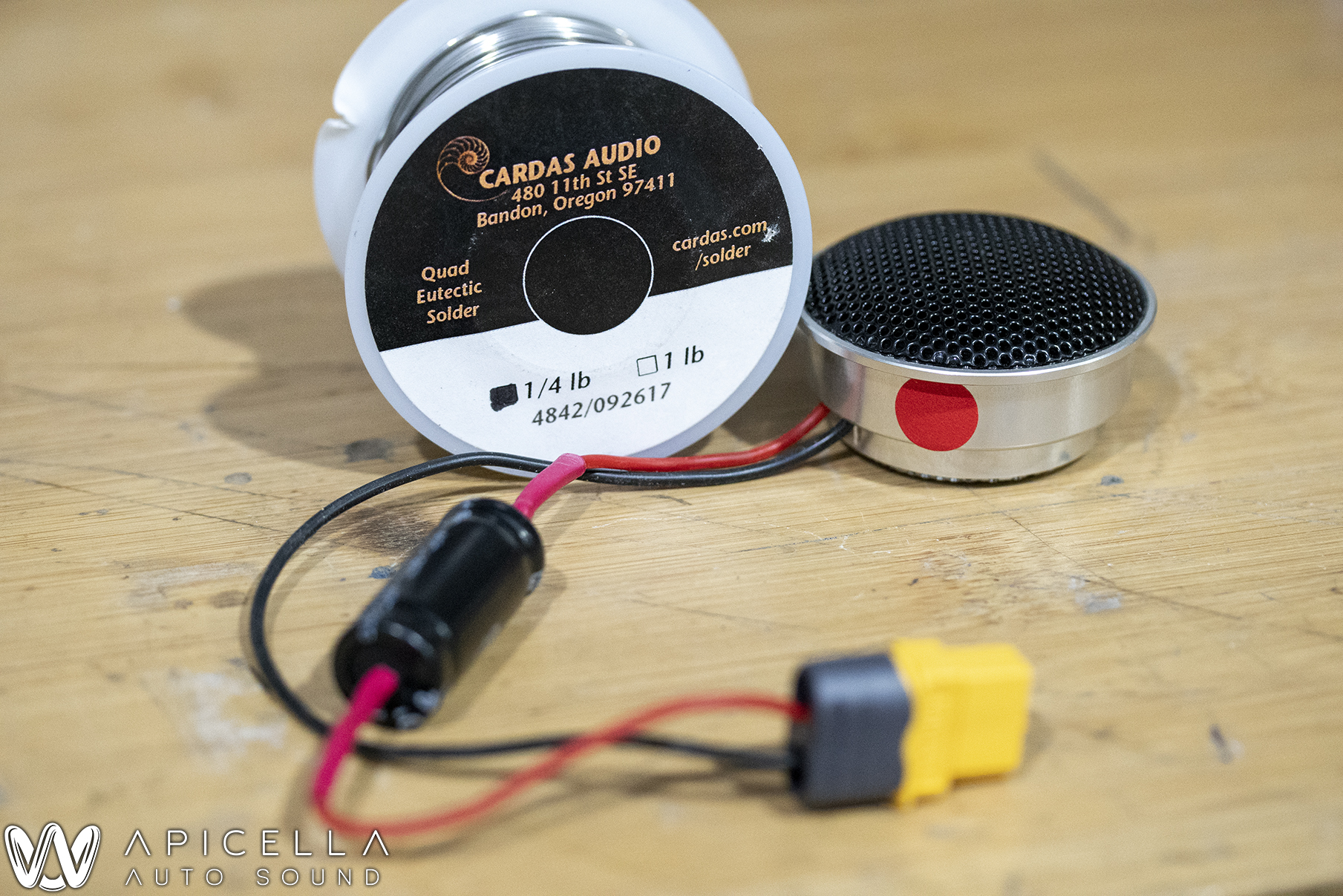 Kick panel grills were built off of the oem kick/sill panels. A fine metal mesh was pressed in a shape that flowed with the car to keep a sleek appearance. 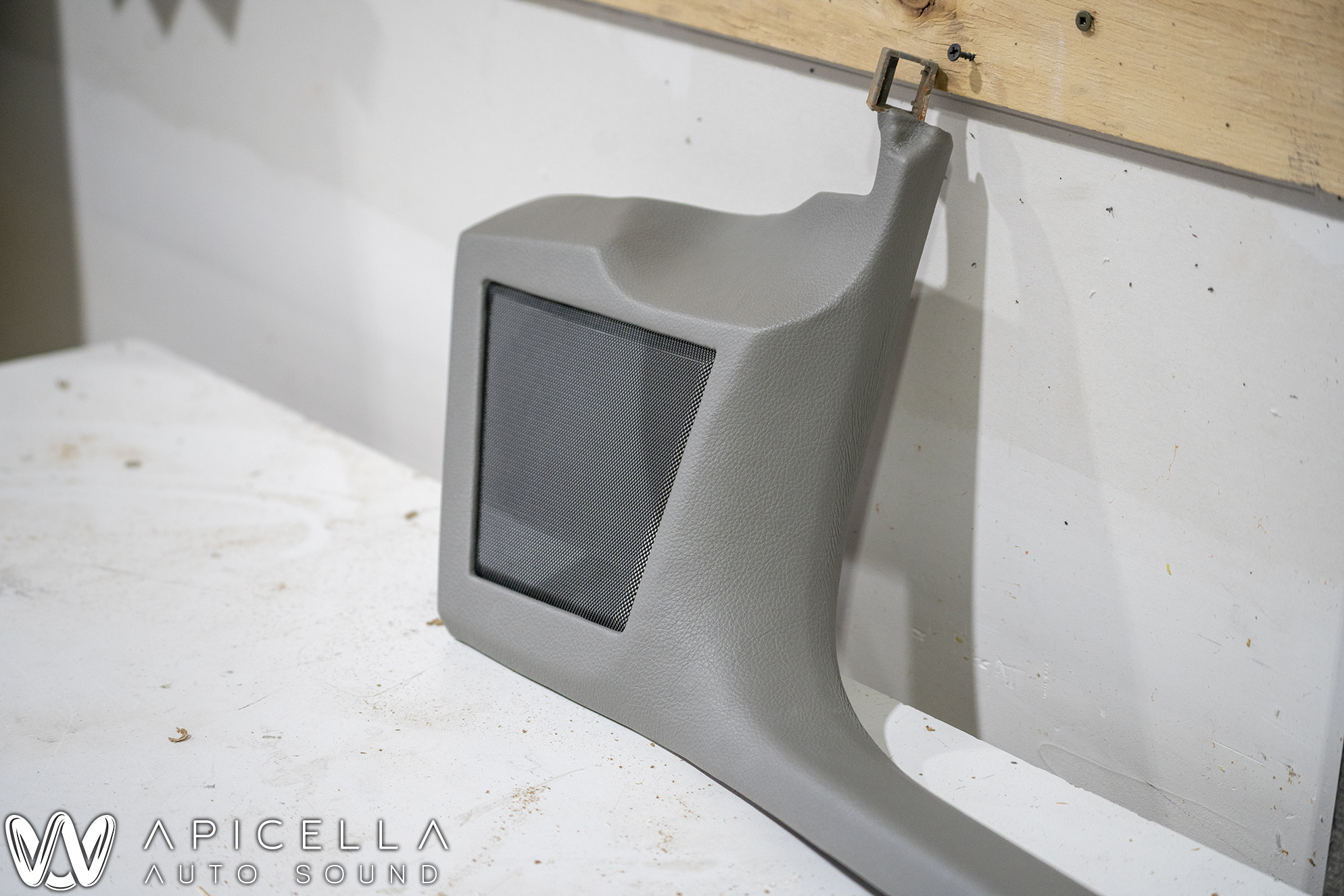 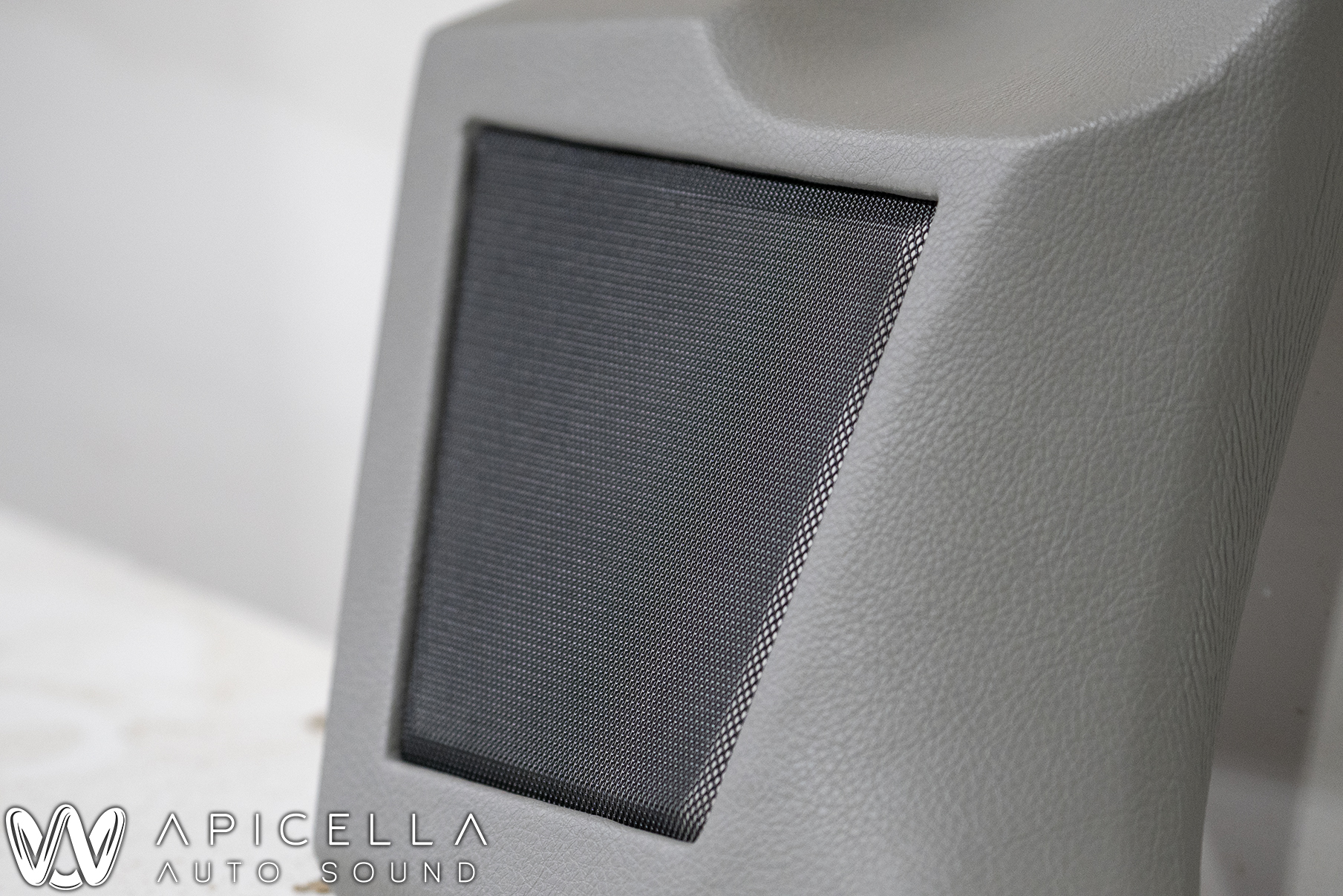 The Audio Development MM12's were installed in a trunk baffle configuration. The baffle was made with 2 layers of Baltic Birch sandwiching a layer of MDF. The thought here was to use two different materials to offset the resonance properties of the other. Once those were attached, the brackets were made and installed. The bottom one was made out of heavy-duty angle iron, and the top ones were made out of some heavy-duty L-brackets. Both were secured with construction adhesive before being screwed to the baffle with Spax Construction Screws. 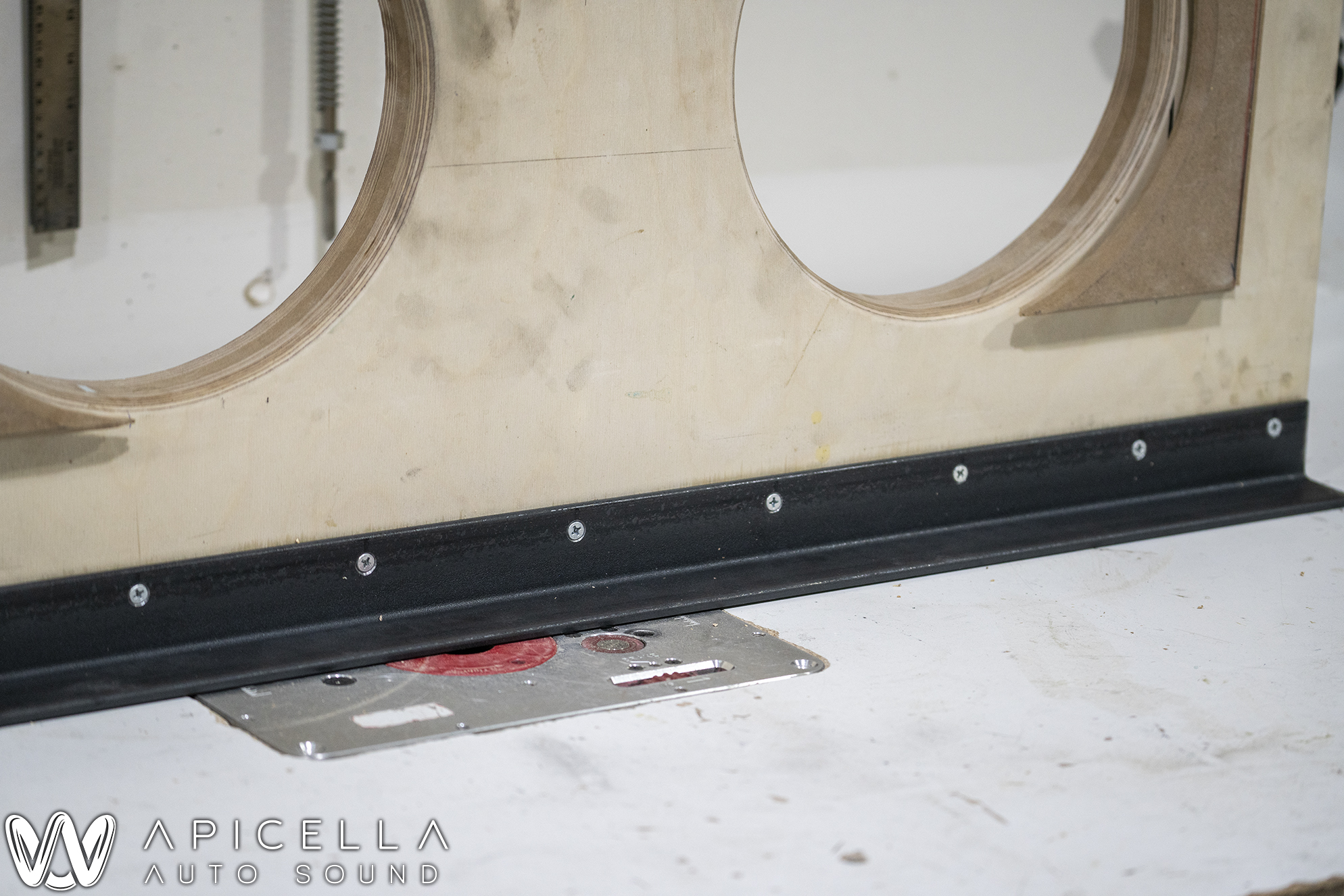 In order to wrap the baffle, i had to order a 1/16" tall, 1/2" deep rabbeting bit to make grooves to tuck the Alcantara into. 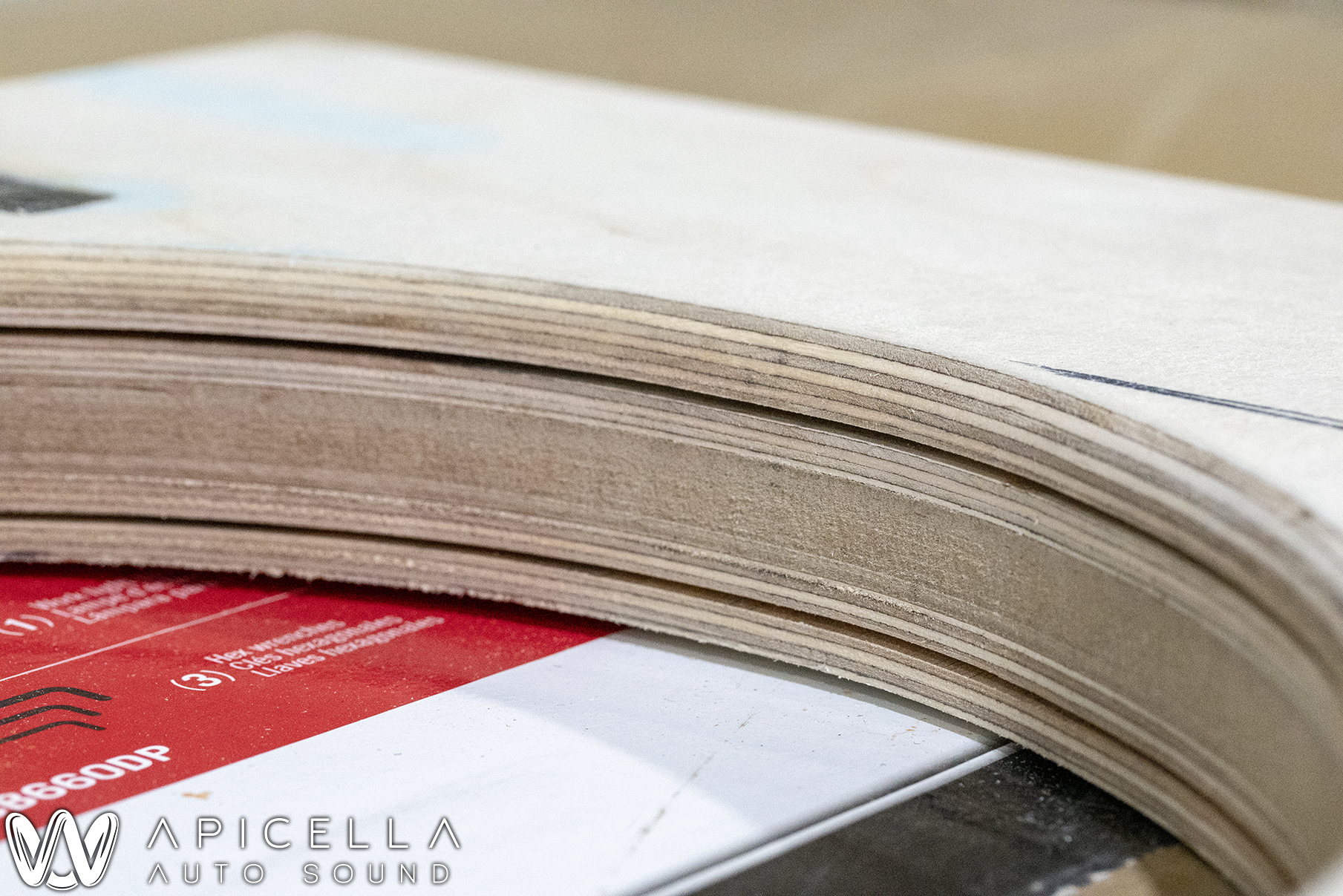 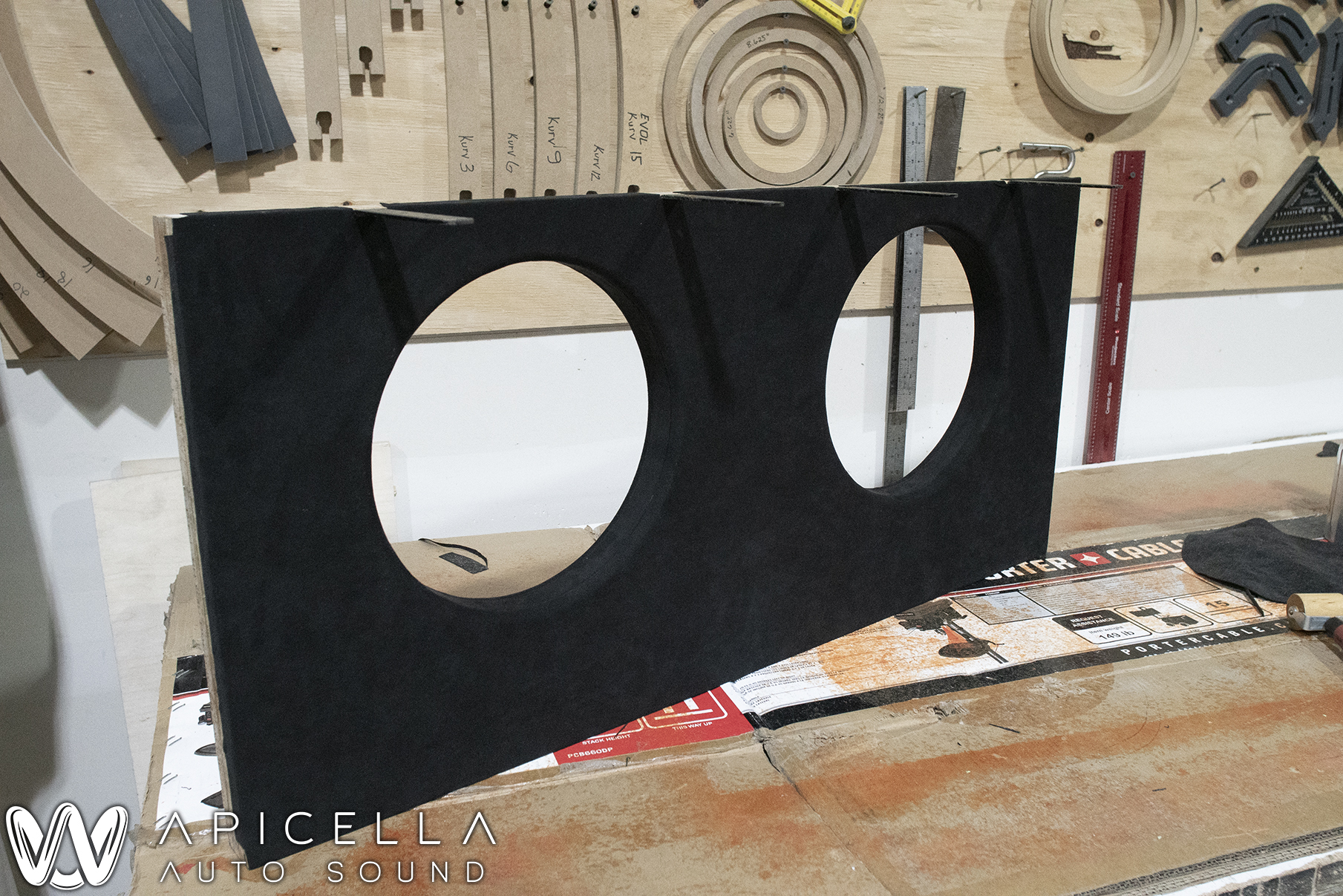 The Helix Director was installed in the OEM Ashtray location. The piece we fabricated was wrapped in Alcantara. 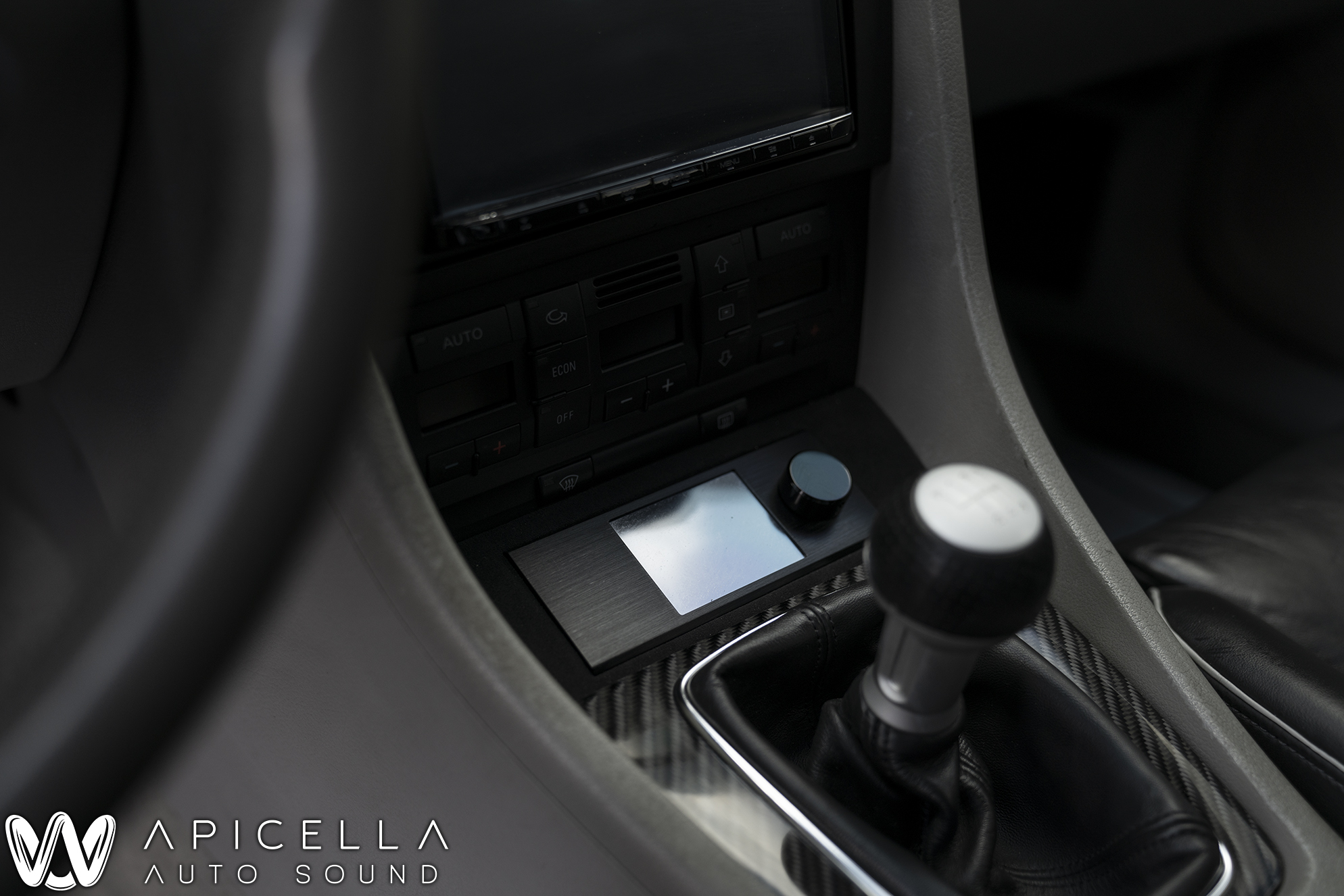 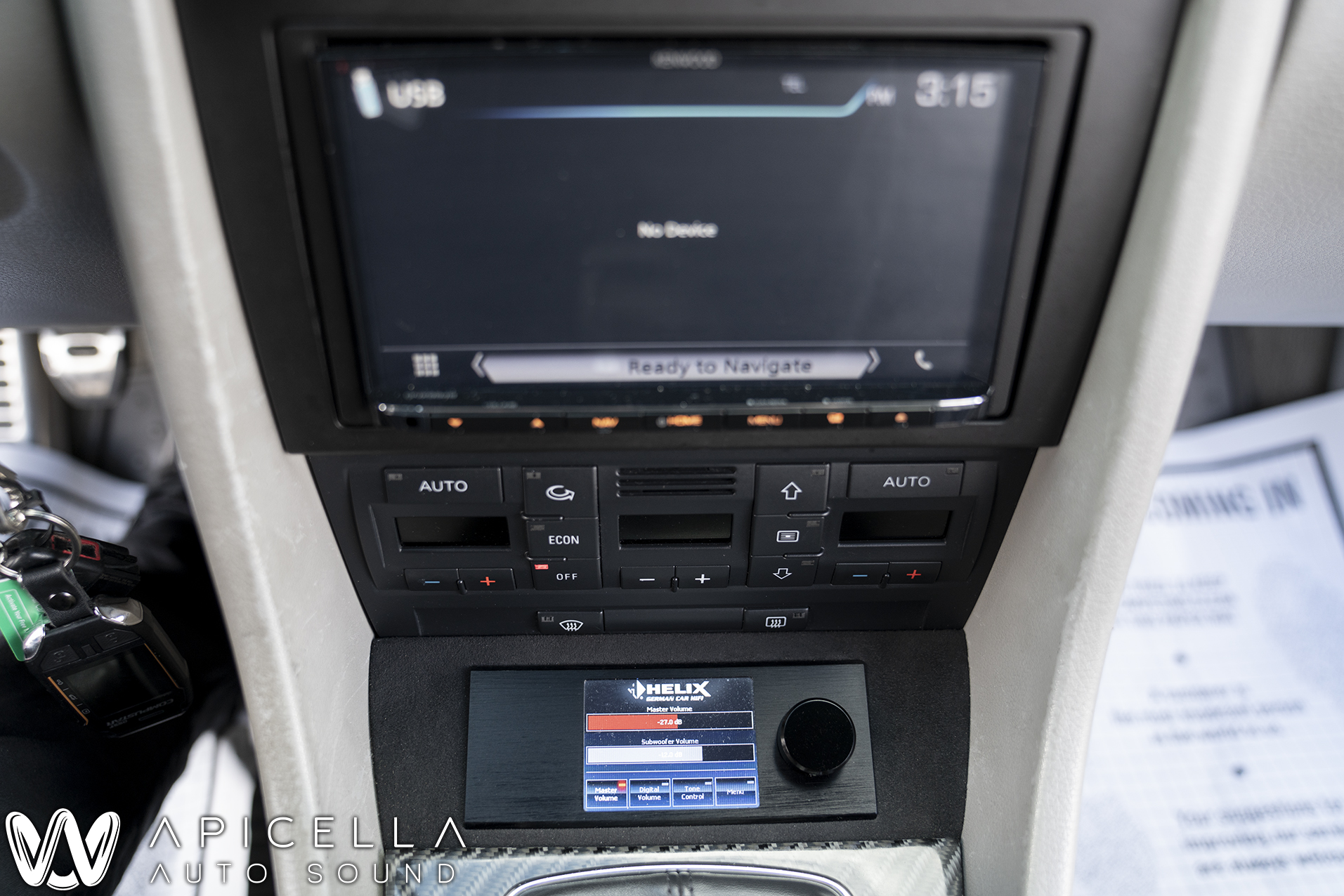 When the rear deck was wrapped in Alcantara, i installed the Audiofrog GB25's using the supplied grills and trim rings, which were painted to match. 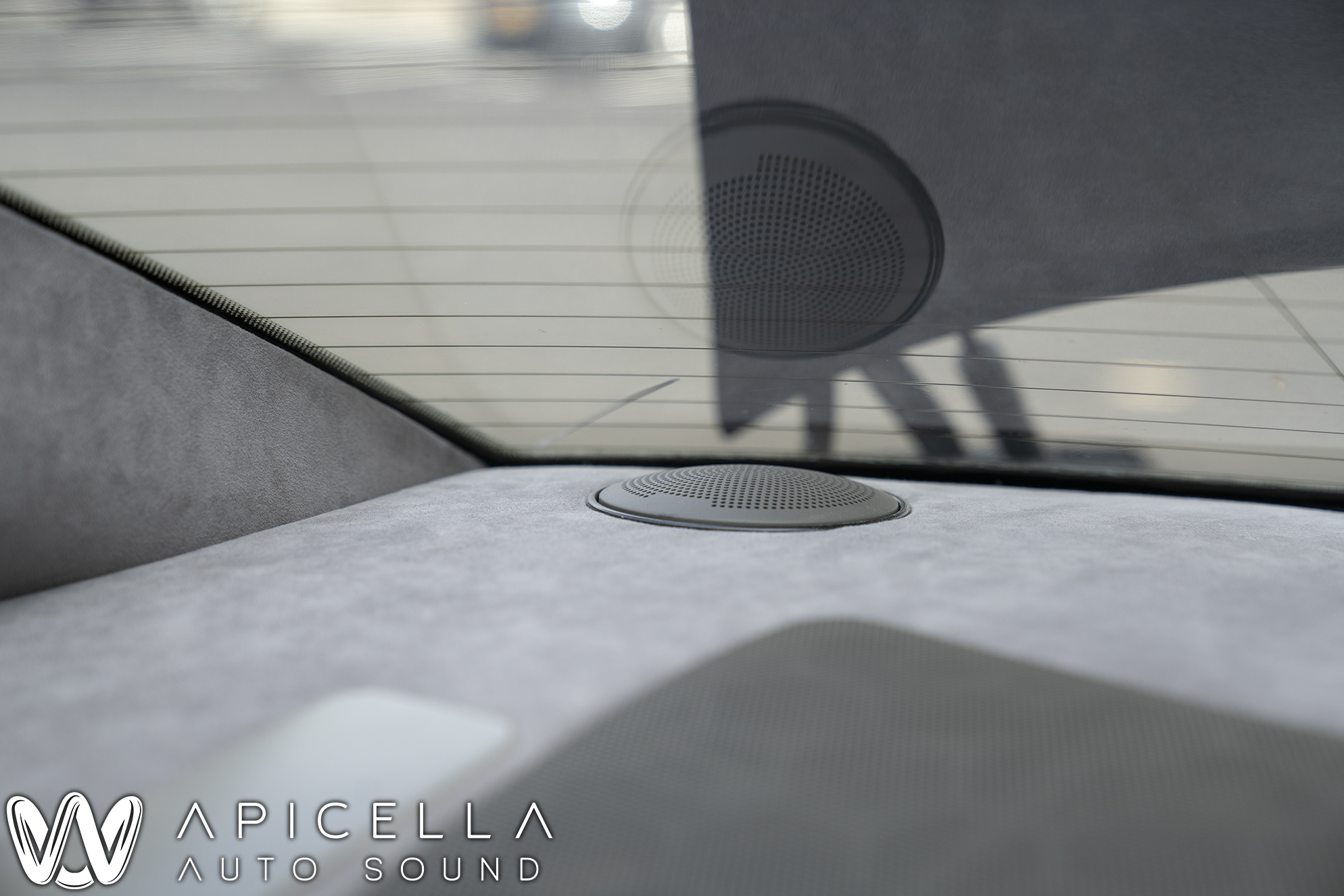 Kick panels house the Audio Development ESA Bass 6.5" midbass drivers. They are installed in pods that vent into the frame rails which provides a lot of airspace. Much more than they truly need. 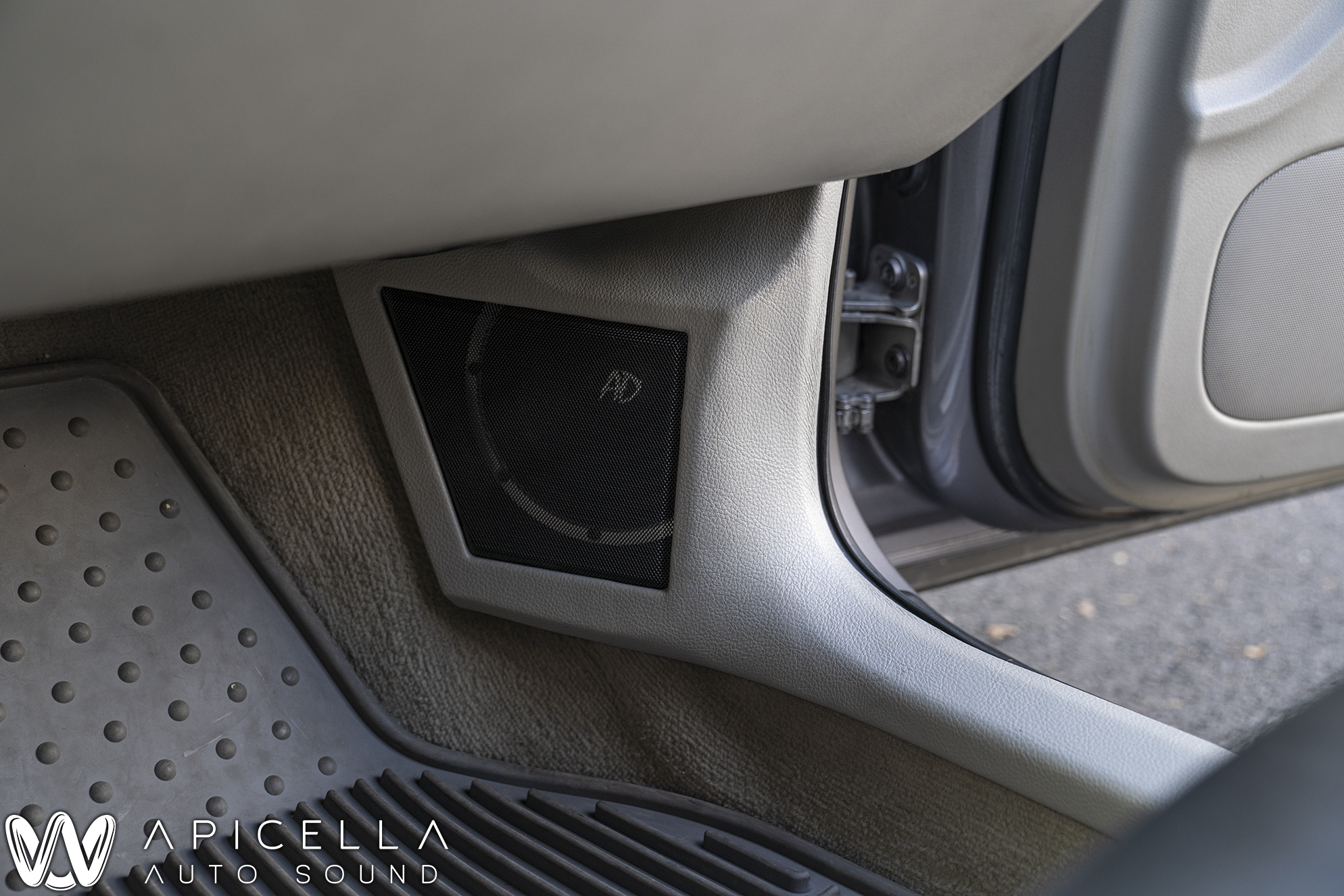 When the dashboard was removed, we took it to an automotive paint supplier for them to scan the plastic and mix us a custom color to match. The dash grills that covered the mids and tweeters were painted with this before being secured to the dashboard with stainless steel machine screws from below. Before being painted, the acrylic perimeters had to be heated up and molded to match the contour of the dashboard. 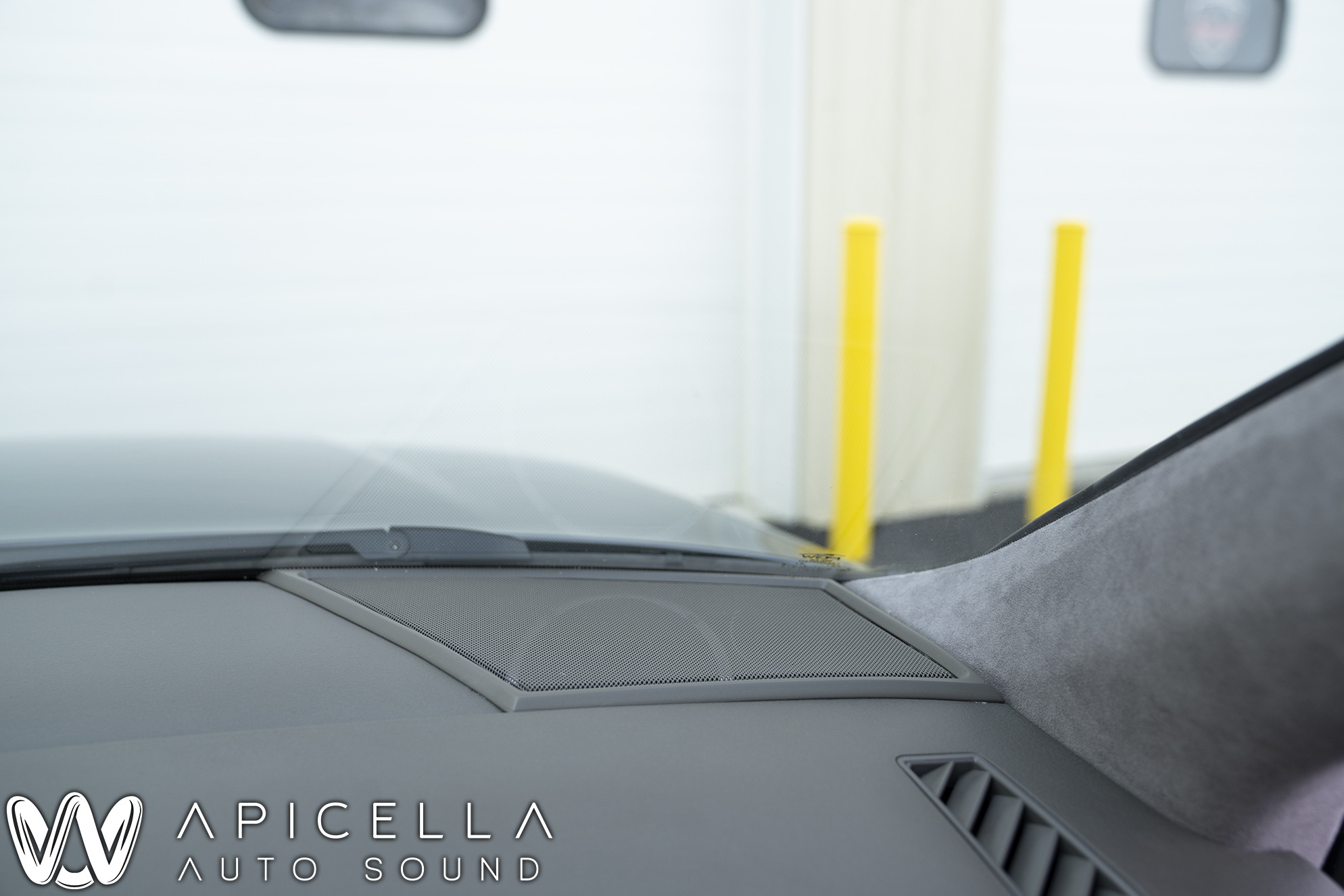 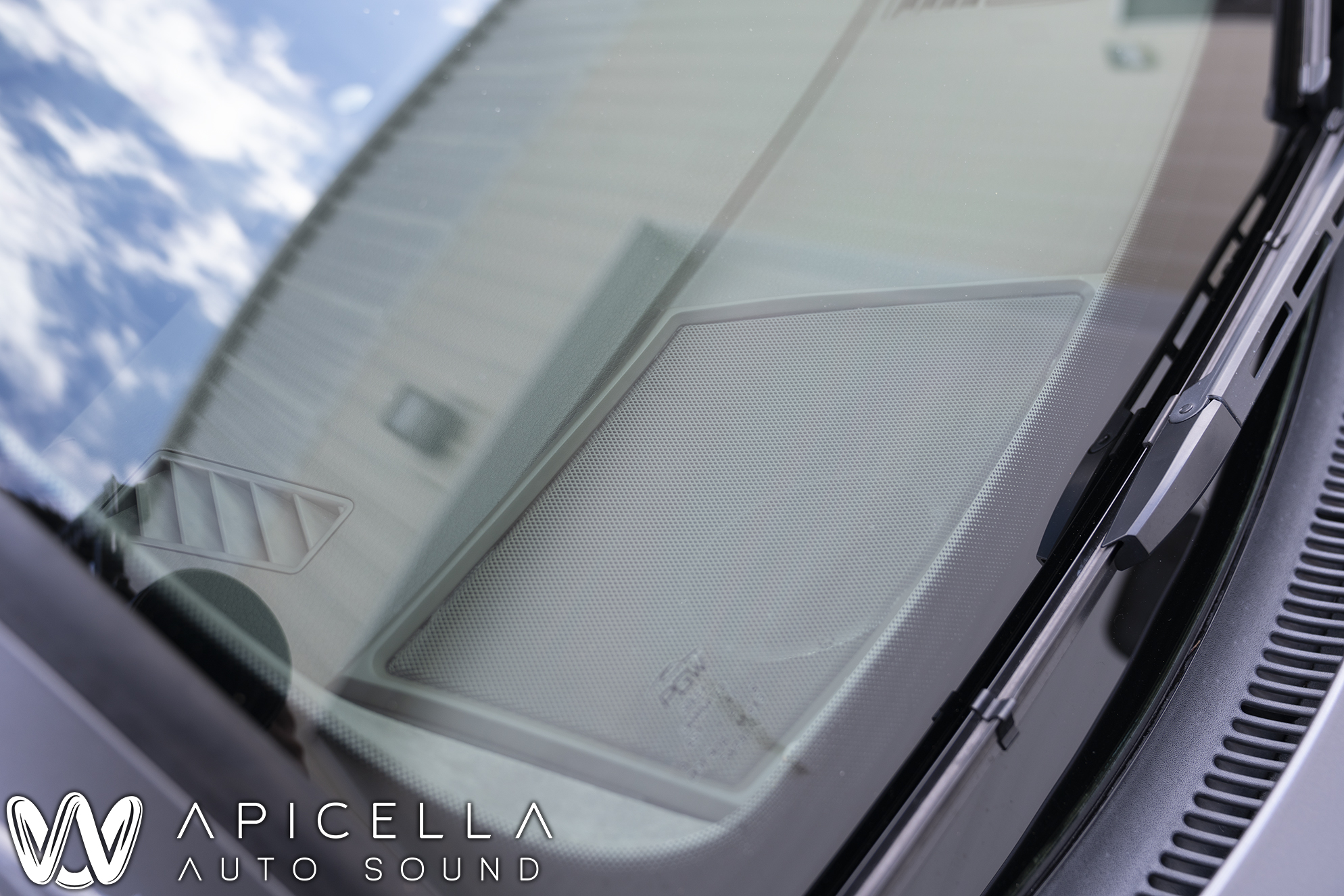 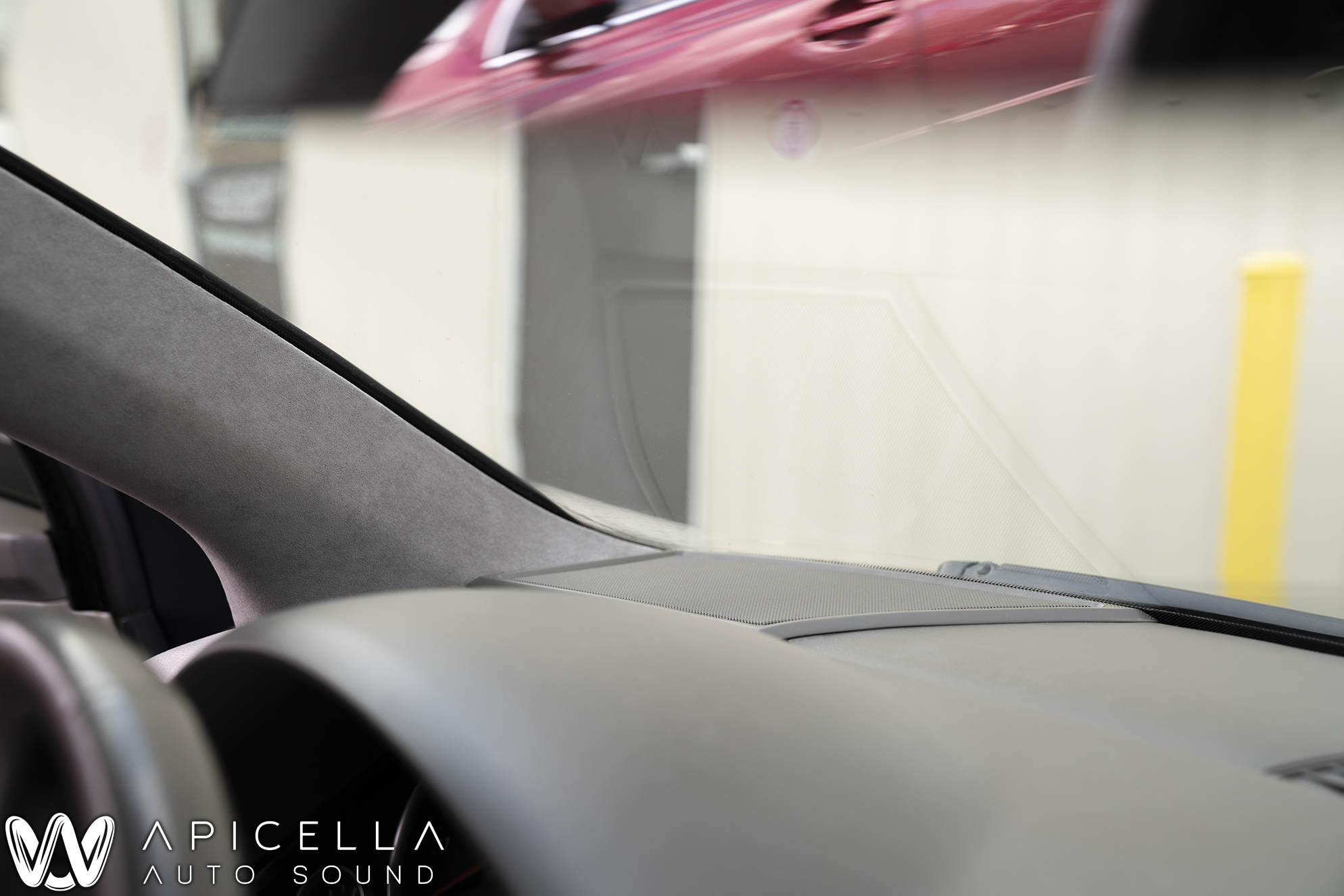 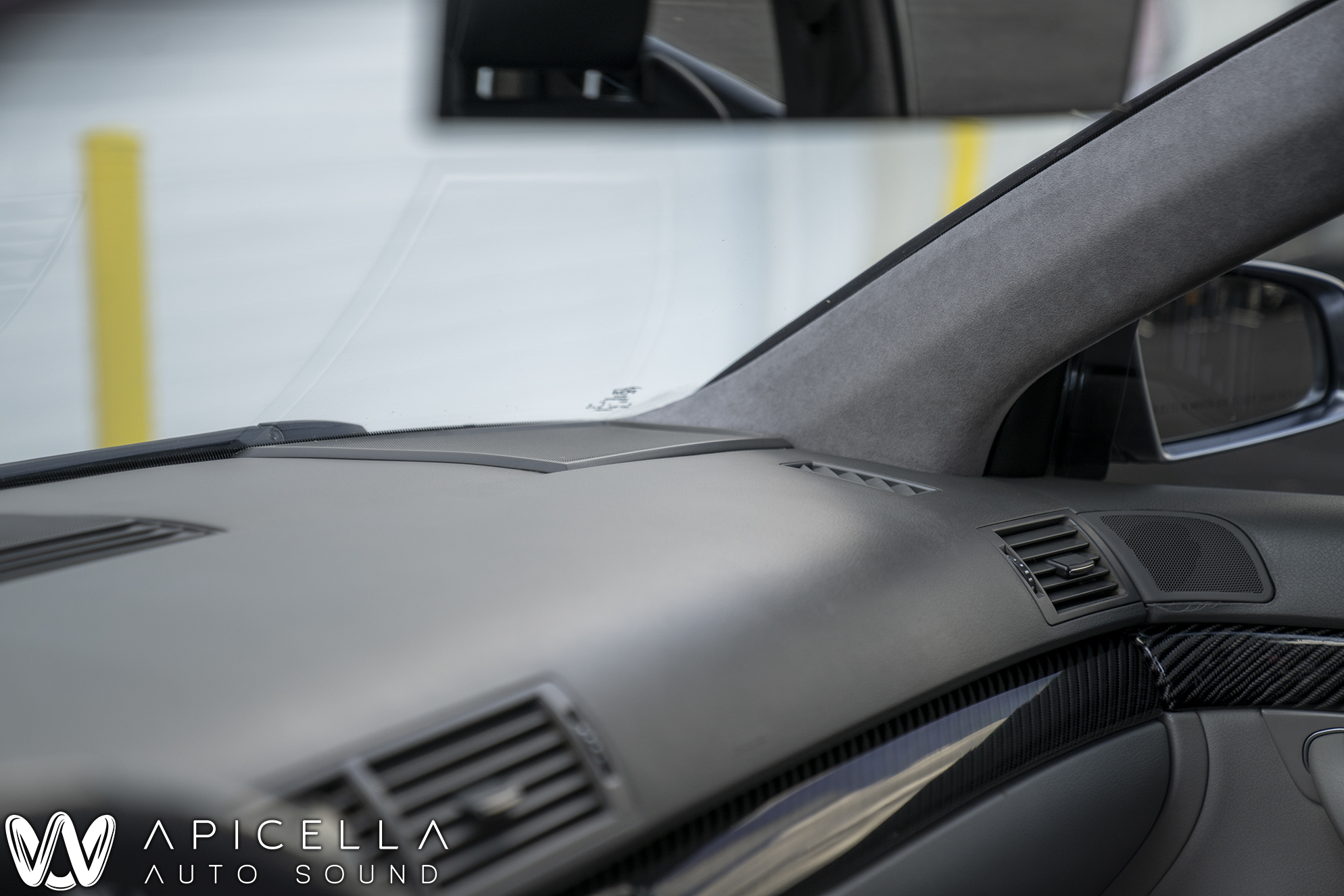 When you fold the seats down, you see the custom paneling that was done as well as the face of the monsters that are the Audio Development MM12's. We laser engraved the supporting vendors as well as our logo into the acrylic paneling. 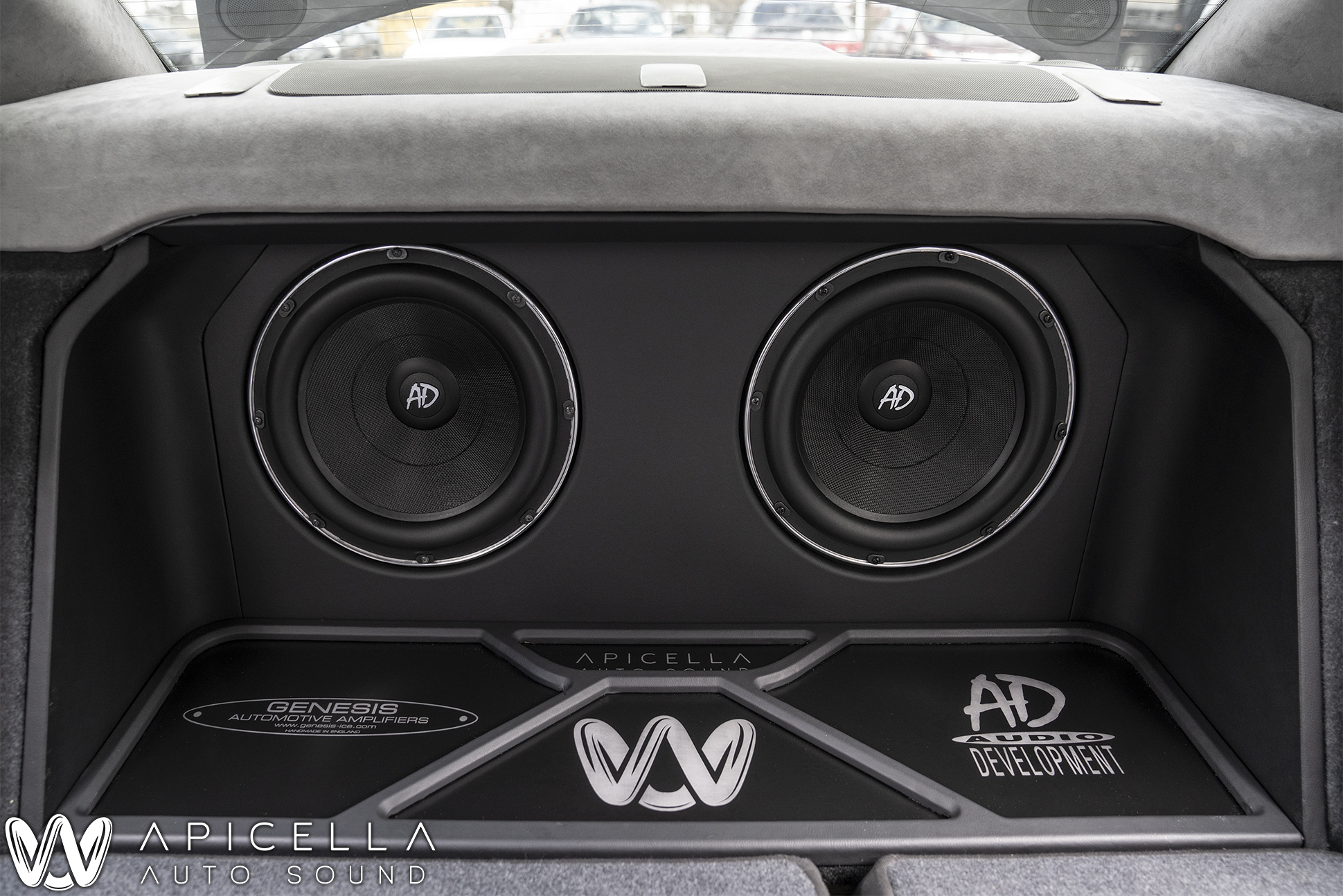 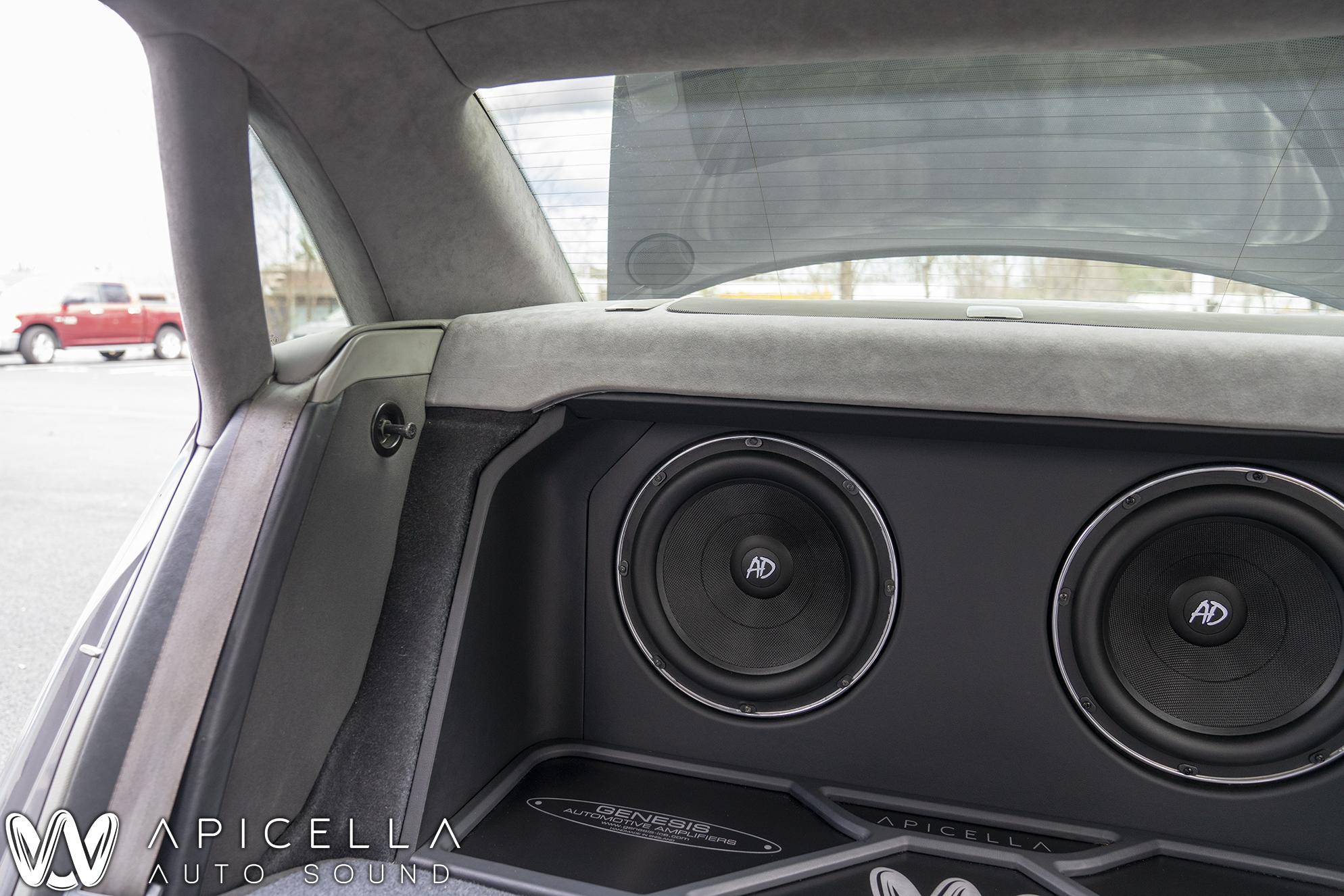 One of the coolest parts of the build.. Here you can see how we routed all cables in the amp rack. This took FOREVER to do perfectly. Much longer than we could have possibly expected. Unfortunately, I do not have any pictures of the wiring underneath all of the panels. It is VERY impressive with how many there are yet how neat it was all ran. I might have photos on one of the other old hard drives. What you also do not see in these photos is the extra batteries, hidden Mosconi amplifier, LED switch and controller, and AC Infinity rack fan hidden but easily accessible. 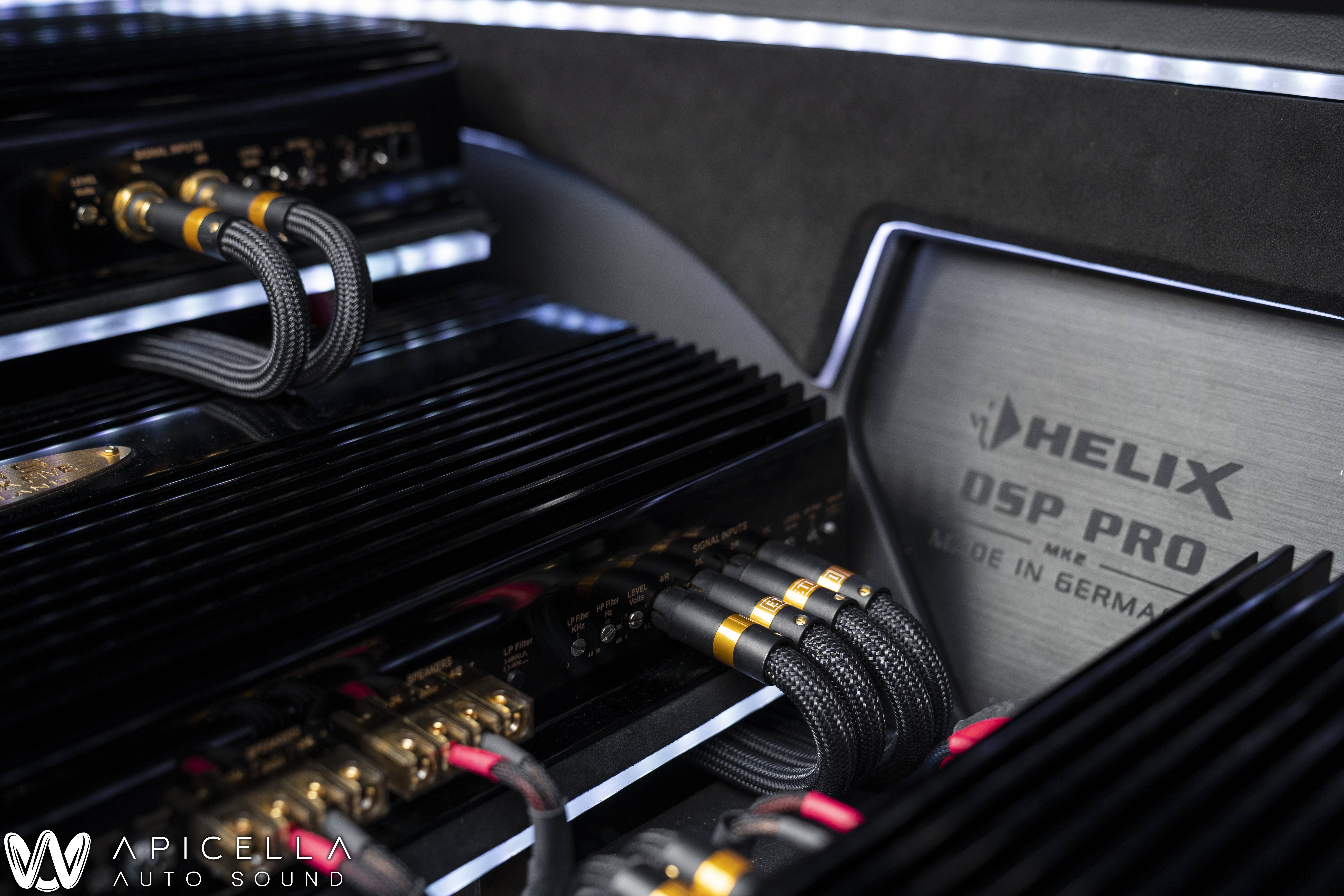 In the end, each Genesis 5 channel amplifier powered one side of the front stage. Channels 1 & 2 bridged to the tweeter, 3 & 4 bridged to the midrange, and channel 5 on the midbass. Thankfully the upgraded Singer alternator and Northstar front battery and rear battery takes care of any power needs. The Genesis mono amplifiers powered one sub each, and the Mosconi Pico was hidden and powers the rear fill speakers, which actually did a lot of good in this car once dialed in. It really helped with getting stage width to outside of the pillars even though the speakers are installed well inside of them in the dash corners, as well as raised the stage height which was a nice and unexpected outcome. 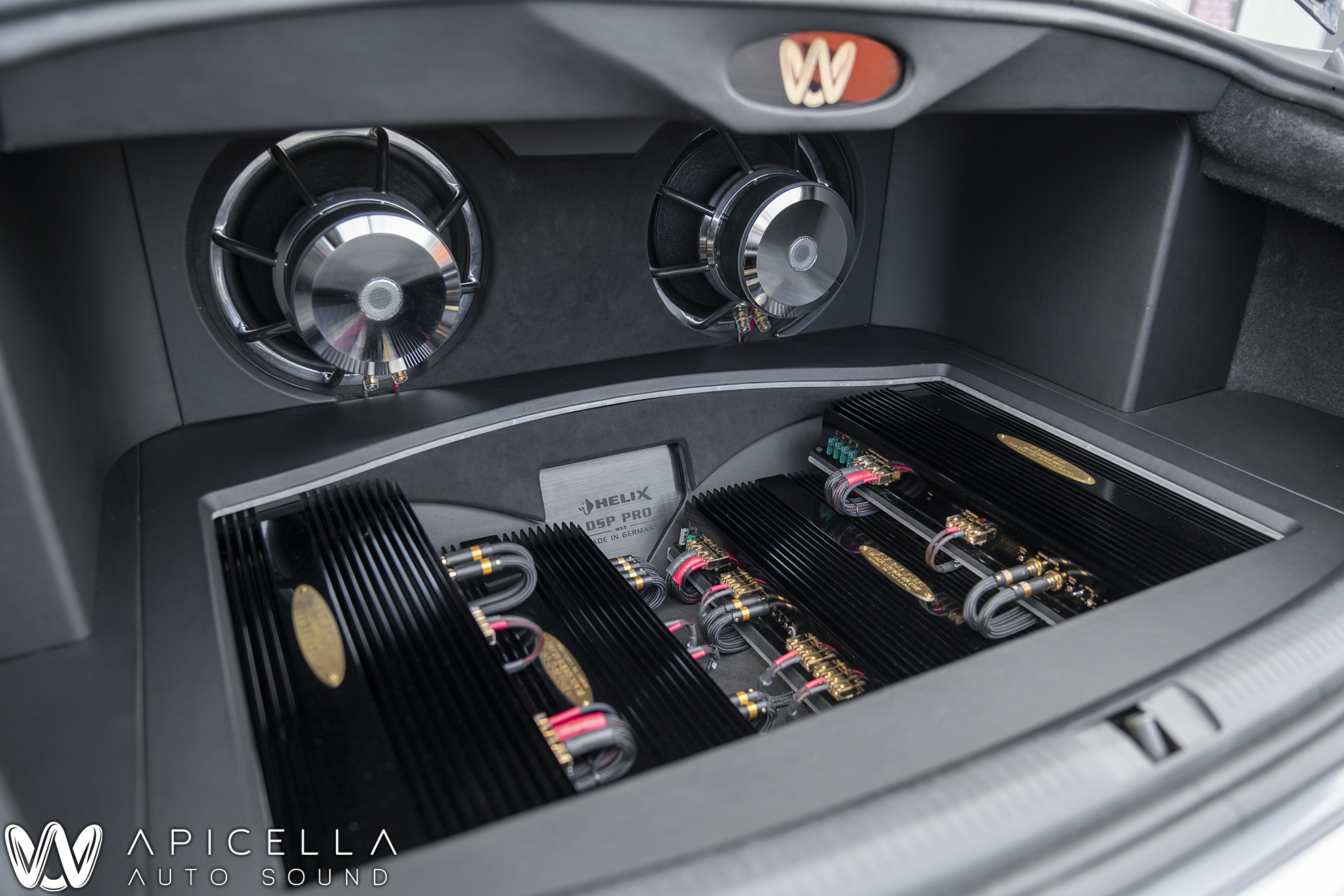 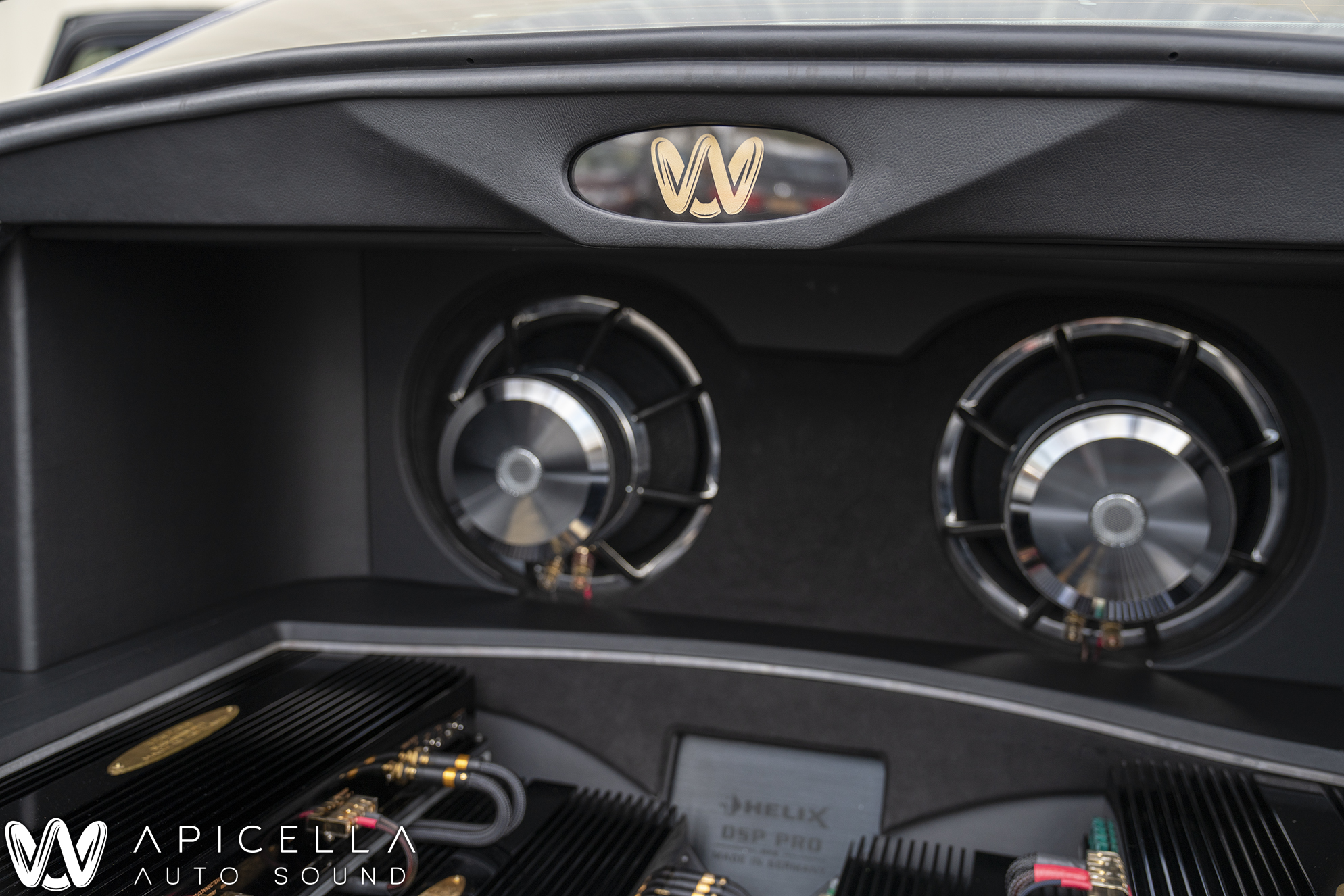 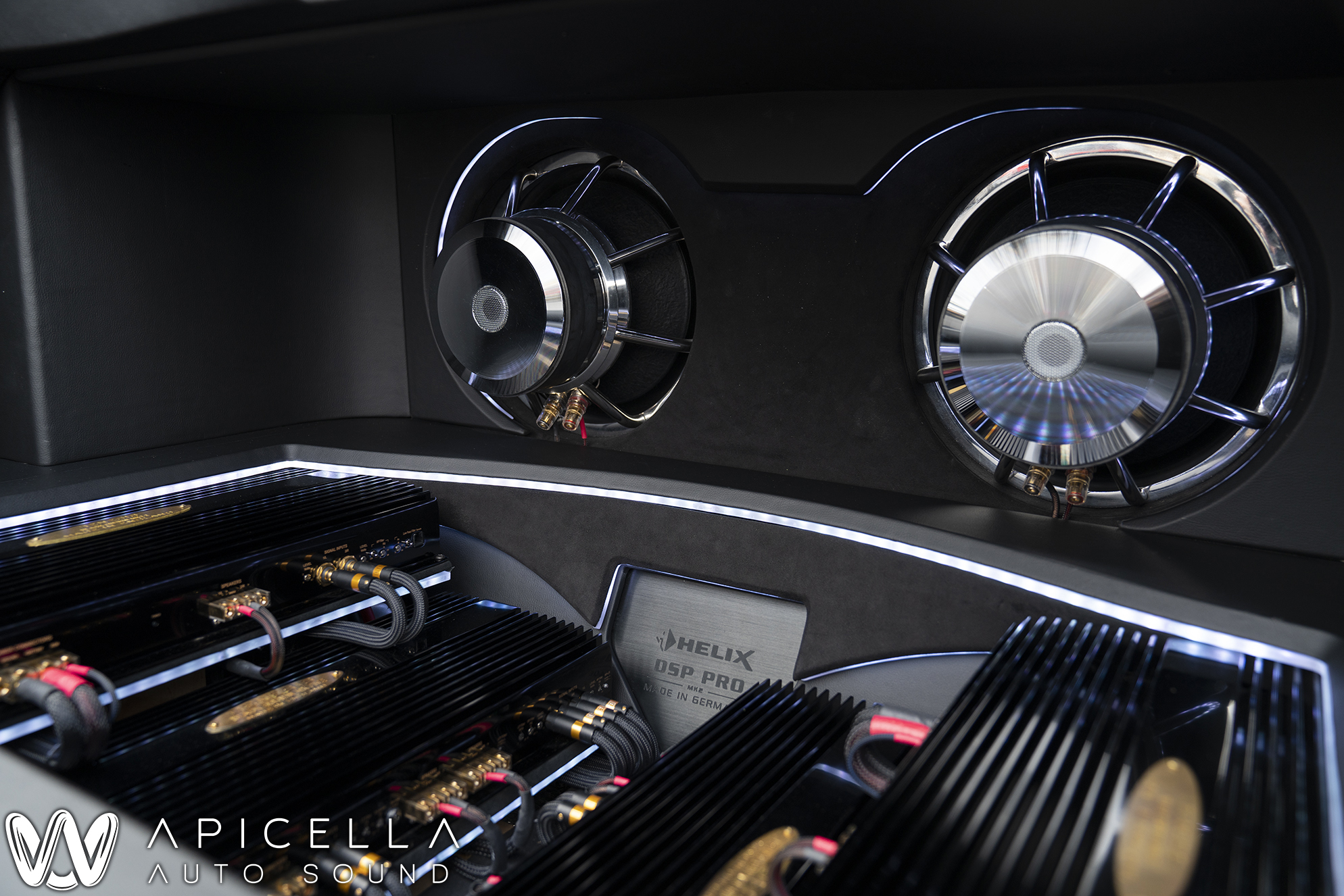 Thanks for looking! I'll dig out the old hard drive soon and post up the in progress pics soon enough
Reactions: NytFlyt and TheHen

Really immaculate looking install. Thanks for sharing pics. This goes to show, it's all just a matter of time and money.
Reactions: SkizeR

Just for my own information....Looking at the sub setup, is this just an infinite baffle style enclosure using the trunk ? Your work is incredible, I'd love to actually here this car perform.
Reactions: SkizeR
OP

No Show said:
Just for my own information....Looking at the sub setup, is this just an infinite baffle style enclosure using the trunk ? Your work is incredible, I'd love to actually here this car perform.
Click to expand...

Yep, this is just an IB install using the trunk. Usually called a "trunk baffle"
Reactions: No Show