Space was not an issue with my last car. However, now space is limited, so I have to consider other options.

Are these any good?

I realise this is a pretty vague question...

To put things in to a bit more context; I had a demo of one of these and found it pitiful (more like a gentle hum really):

Would one of the previously mentioned Kicker Subs provide more spl?

Both of those products are pretty awful and are a waste of money.

THATpurpleKUSH said:
Both of those products are pretty awful and are a waste of money.
Click to expand...

Space was not an issue with my last car. However, now space is limited, so I have to consider other options.

Are these any good?

If you just want to throw something in and have a little bit of bass response and not have to do the work of adding a real sub and amplifier, being that its a leased vehicle or a non-owned/paid off vehicle, this works fairly decent for that purpose.I have two i use from time to time in work vehicles

Space saver under seat subwoofer  is a misconception, actually its not a subwoofer but rather, a woofer so that is the wrong name for it.  Given it has an 8 or a 10 inch shallow mount sub does not mean it will perform the same as a dedicated boxed subwoofer.

These contraption would not satisfy many consumers as others have stated here, only adds a bit of "ompth" to mid-bass frequencies.  I would not waste my time and money on it, if you are after bass in a little space, settle for a bazooka bass tube or a small 6 inch or 8 inch subwoofer in a dedicated sealed box would provide much more punch than these shallow subs, or shall I say, shallow woofers!

Thanks a lot for the replies, they confirmed my suspicions.

I've only ever had one subwoofer in a car before, and it was Kappa Perfect 12D vq. I was unsure how to do the fine tuning, so I just had it in a ~1 cu.ft sealed box. It may not be a "legendary" sub, but I think it's probably spoiled me for anything like the ones I originally suggested.

Anyway! I was considering putting one of those little Kicker woofers under each front seat, but now I think i'll just use one space for an amp, and the other for a proper subwoofer.

I was thinking the Pioneer GM-D9605 &amp; TS-W3003D4. Once again, the space issue, but I can apparently put this sub in a sealed enclosure close to the minimum recommended size.

Do any of you have any experience with either of these products?

What vehicle are we talking about here?

Which by all accounts is very nice for what it is, so likely any of these super space saver all-in-one options will disappoint by comparison.

What vehicle and precisely how much space do you have?  Best options are going to be custom, though I would suspect the JL "stealth" type boxes would perform well if the price tag doesn't scare you.

There's a surprising amount of room under the seats so i'm going to utilise that (putting the Jack, under passenger seat, in the boot). Since the two woofers suggested above apparently aren't that great, i'll go with the bigger sub under one seat while the amp is under the other.

*putting anything in the boot area is not really an option as I specifically bought this car as an economical, practical commuter*

Thanks again for the suggestions, but my amateur self, unless there are bad opinions, has tentatively decided on the above mentioned sub/amp combination (Pioneer GM-D9605 &amp; TS-W3003D4). Some input may still be useful here...

There is a woodwork bay right next to the bay I work in at my workplace, so I have ready access to the equipment needed to make a custom enclosure.

I have plenty of time to plan this as it looks like, to be cost effective, I will be importing the components.

Mate, I say go for an 8 or 10 inch in a sealed box and that would keep you more than happy.  Those small under seat 'mid woofers just don't cut the cheese IMHO!  They don't cross that low as well so you can determine where the sound is coming from.  A true subwoofer should be able to deliver without the listener able to distinguish where the subwoofer is placed and that is only achieved by applying a low crossover point and correct gain setting that only delivers when required, otherwise the front stage should deliver the staging and imaging effect.  I think you get the point here! :graduate: 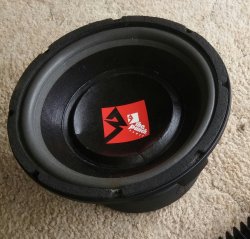 I think you're right - given the space, i'll just go for a smaller subwoofer.

Back to the space issue, i'm now thinking of either a Kicker PX, or Soundstream Picasso Nano amp.

If you liked the kappa perfect then you definitely don't want that Pioneer. They may not get a ton of love here (the majority here are more spl oriented), but those subs sound fantastic and extend low for a small woofer in a sealed alignment. Not sure what your budget or current goals are, but there are better options than Pioneer subs. That 9605 is a solid performer though.

This project has been resolved...for now.