How to play TV shows on iPod and enjoy iPod on TV?

Many iPod users watch the hit “Gossip Girl” or “Lost” through the smart toy of iPod, but it cost money to download each episode, so a full season of “Lost” will cost quite a lot of money. You can spare the money for a DVD to iPod Converter. This is the way that cost you the least.

The DVDs, you may say, costs more. Yes, it is true, but you don’t need to buy DVDs, you can record DVDs all by yourself just with a DVD Recorder. As we all know, iPod only allow users to enjoy video or music on iPod and you cannot transfer the audio/video files everywhere you want if you have bought movies from Apple Store. With DVD to iPod Converter, you can convert any DVD to video that can playback on iPod, and if you choose, you can convert DVD to other handheld devices. No more limitations.

Now, the first thing you need to do to achieve playing TV shows on your iPod is to record your favorite TV shows. And burn them to DVD disks with a DVD burner. 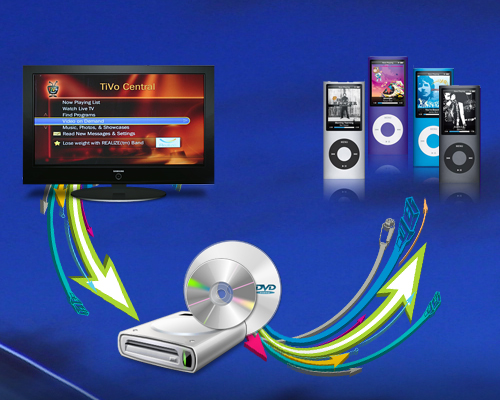 Well to play iPod video on a TV, you don’t need to prepare much, an iPod with Video and A/V cable as well as a cable TV, which is enough. Let’s rock and roll. 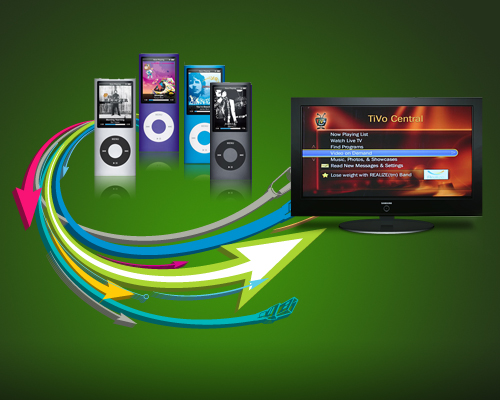 The simplest and most direct route is to get a cable that plugs into the iPod and the TV. You use the iPod's controls to start and stop play and use the iPod's screen to navigate the menus and set up the video. The iPod's menus don't appear on the TV screen, but as you're holding the iPod, this isn't a problem.

Slide the connector into your iPod's headphone port, connect the yellow, red, and white connectors on the other end of the cable to the corresponding RCA plugs on your TV, and you're in business. If you have an iPod Universal Dock, you can connect the iPod A/V cable to the dock's line-out port instead. You can then keep the A/V cable plugged in when you remove the iPod from the dock.

To set your iPod to output the signal to the TV, follow these steps:

1. Scroll to the Videos entry on the main menu, then press the Select button to access the Videos screen.

2. Scroll to the Video Settings entry, then press the Select button to access the Settings screen.

4. Make sure your iPod is set to output the right kind of TV signal for your TV: NTSC or PAL. NTSC is primarily used in North America and Japan, while PAL is used in most European countries.

5. For the Wide-screen setting, choose On or Off to suit your TV or your tastes.

6. Press the Menu button to return to the Videos screen.

When you're playing short videos, you may not want to start each of them playing separately. To make your iPod play them for you, create a video playlist in iTunes, add the videos to it in the order you want, then synchronise your iPod. You can then set the playlist playing from the Video Playlists entry on the Videos screen.